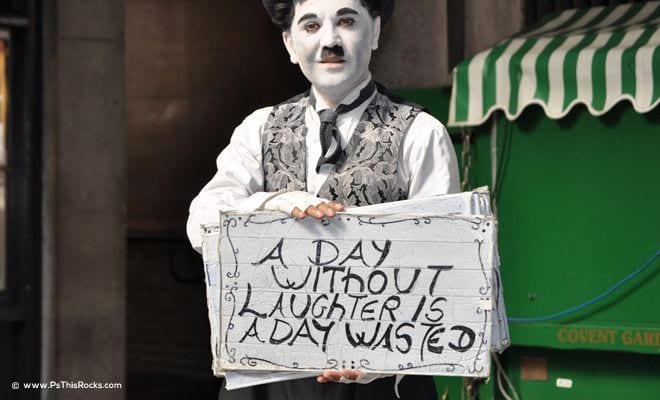 Covent Garden Market is a lovely square with an indoor and outdoor patio restaurants, entertaining street performers, and shopping. You probably assumed the outdoor part, but keep in mind a European ‘garden’ can be a flower pot too. Covent Garden is located in the heart of London and has been filled with performers, singers, jugglers, mimes, and just about any other type of circus act you could possibly think of. 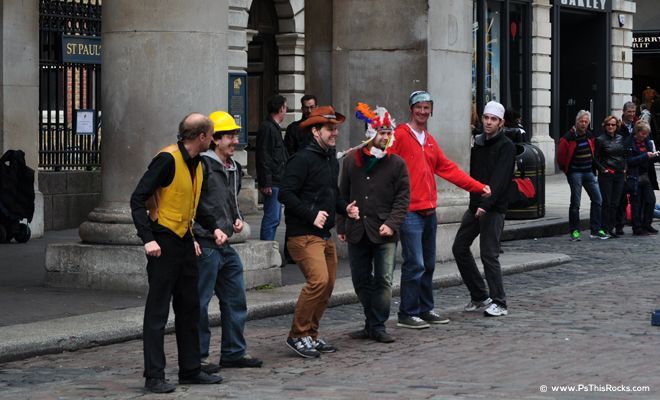 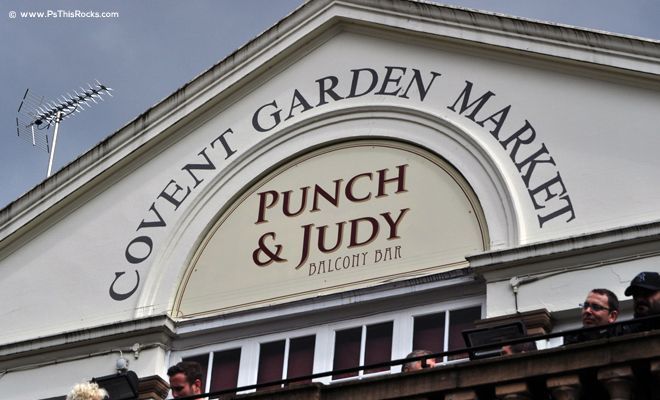 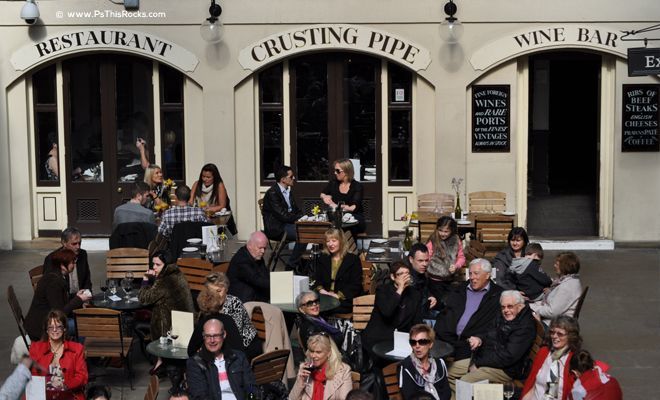 Unlike most American cities such as New York, these performers are approved and have a scheduled time and place to perform. Can you imagine the New York Subway Transit System trying to control the metro trumpet players? How nice!

The thought of Covent Garden simply makes me smile. The architecture like most of London tells a story of days gone by. It’s filled with kids, cupcakes, candy, and great shopping. What’s not to like? 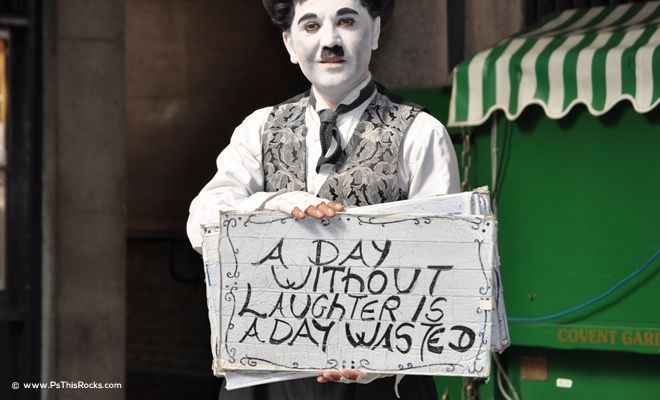 One of my favorite parts Covent Garden was inside what appeared to be an old train station, there was a mime who reminded Boyd of a British television personality, Charlie Chaplin. The mime was extremely entertaining as he dowsed an older lady with water sprinkles, hair and all!  I couldn’t even begin to imagine this happening in America. My initial thought was….what would this grandma do if that had messed up her hair in the states? She would have probably sued the mime. Brits have a great sense of humor and grandma seemed to love it! She didn’t think two seconds about her hair. So here, I’m starting to understand British humor more and more. 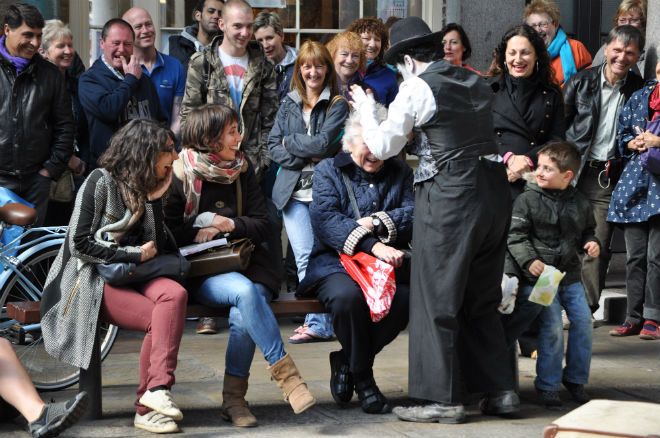 After the mime finished making a spectacle of out of grandma, his eye was on my Brit! Boyd became the next adult magnet for the mime show. Being an awesome sport he took his place at the front of the crowd to assist his new, found friend that looked like today’s version of his favorite childhood character. The video shows that he loved every minute of it! And I, well, I love watching him be the center of attention – funny or not. 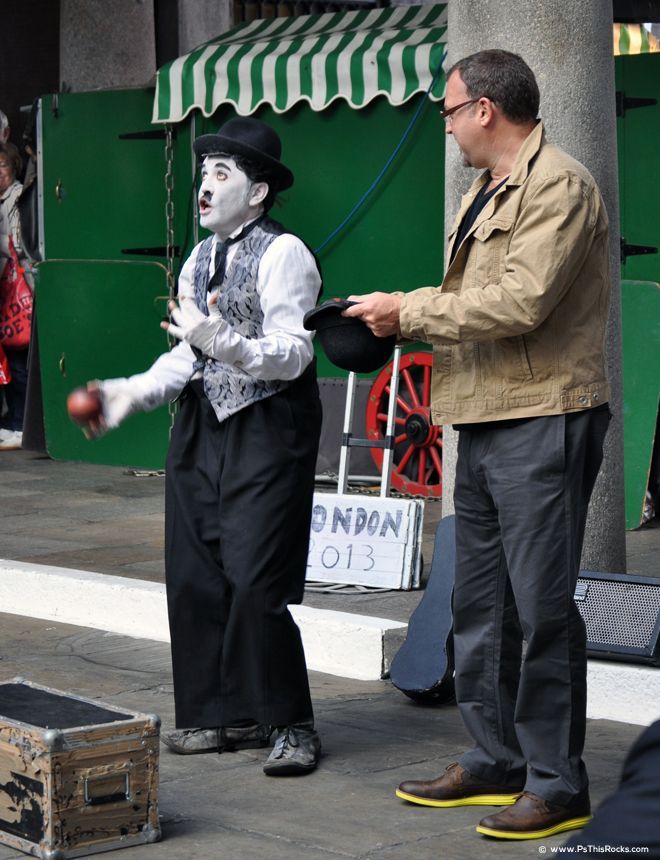 Strolling through the stores is a favorite past time for me. Being a former retailer and interior designer, I can’t help myself. I notice every detail, every creative display, and love the helpful, yet not leachy staff in most of the shops.

As Boyd patiently waits on me to make my way through the often crowded boutiques in Covent Garden, he enjoys watching food….especially the gigantic pan of Paella being fried in the courtyard. From the look on his face, I think he was regretting being full from lunch. I must admit….it looked ahhhhmazing and smelled even better. After eating in the fancy conservatory we did figure we could have saved a few dollars and enjoyed the entertainment of the free opera singers bellowing from the lowest and highest of their vocal cords too! 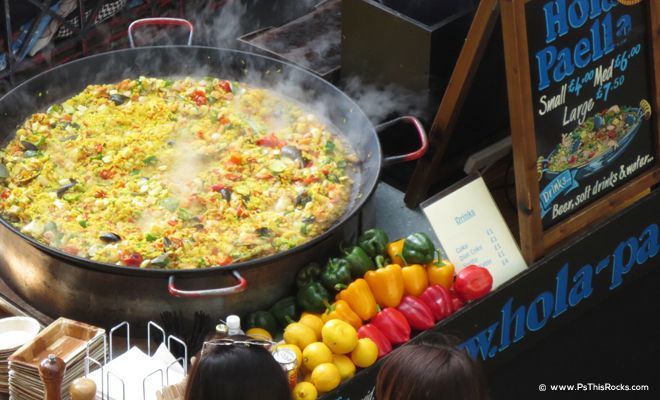 On the way out of Covent Garden, I also captured this photo of King Street. I grew up on King Street {in Suwanee, Georgia, U.S.A}! My mom still lives there. 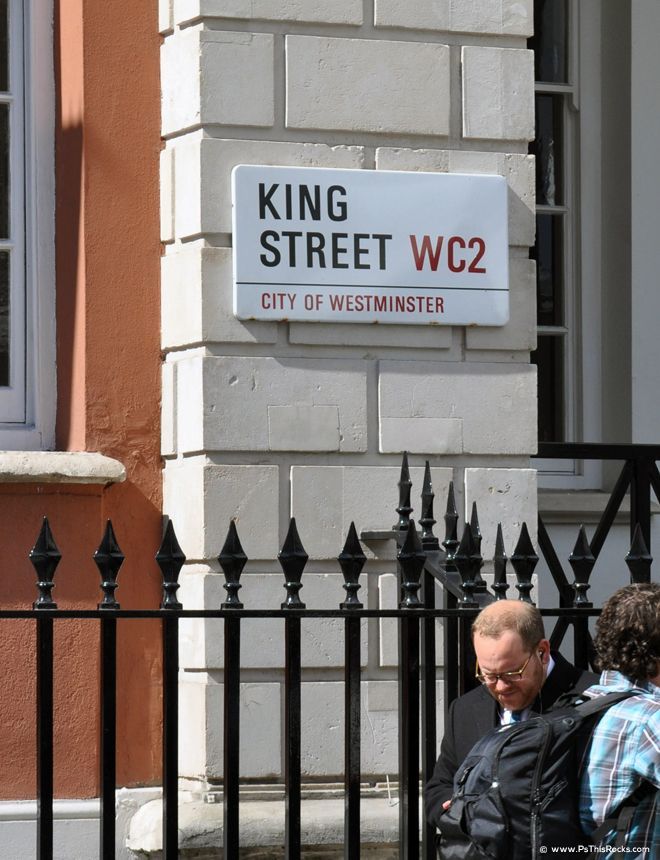 I could have only imagined how different my life had been if I had grown up on this King Street with the Genius Bar {Apple Store} right next door! There’s no telling where my career would have gone with a little apple juice in hand at a much earlier age. {Yes, I’m that girl that a P.C. could never keep up with and a die hard Steve Jobs lover!}
After reading the Steve Jobs biography, I visit almost every Apple store looking for the glass staircase, sort of a Cinderella experience I found one here in London. I was so impressed with the difference in the space and architecture in the London stores vs. our own U.S. Apple stores that I had to take a video for you. Watch this to see the details, SPACE and of course the GLASS STAIRCASE!

P.S. See…I still have on my flip-flops! Remember that story? If not, click here to see why I would dare wear ‘beach shoes’ on the streets of London and even more disgustingly…the grand glass staircase in the Apple store. Steve Jobs was doing cartwheels in his grave…I’m sure of it! 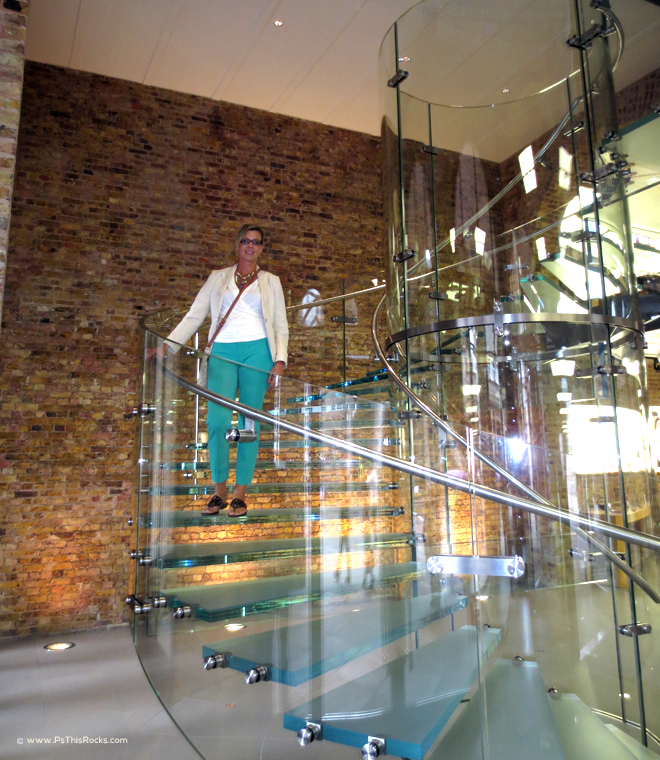 The walks in London are phenomenal! Everywhere you turn there’s something visually stimulating! I guess that’s why I have over 1,000 photographs in a three day trip alone. I’m unbelievably impressed with the window displays and scale that designers use to grab the attention of people passing. I can only wish that my clients and fell retailers would put this amount of color and sweet style into their windows. It’s so important! On the way out of Covent Garden Market on the way to Regent Street, II fell in love with this candy store display.  It’s soooo sweet! 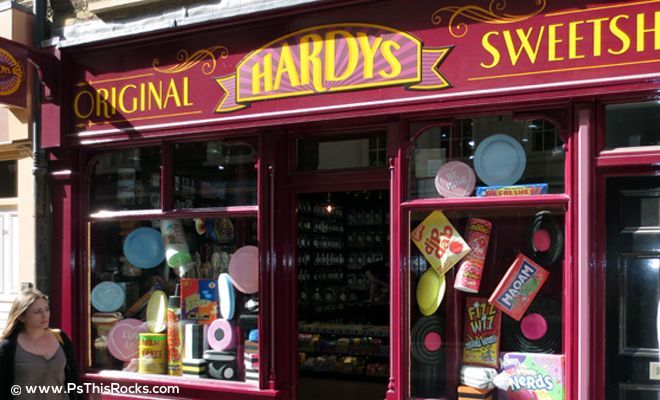 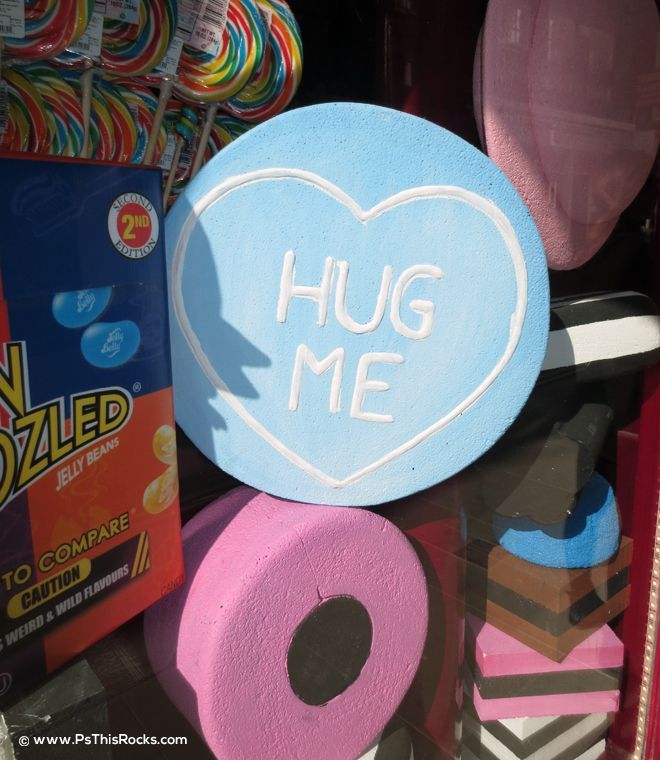 Relaxing! Kicking back, not worrying that someone will Facebook message your preacher while you’re chilling with a glass of wine at lunch. After all, my friend and America’s Beauty Expert and reigning Mrs. Italy, Dr. René Dell’Aćqua has all the research to prove Why Wine Works for Your Health.

Grab a glass and let’s go off the beaten path of Regent Street!