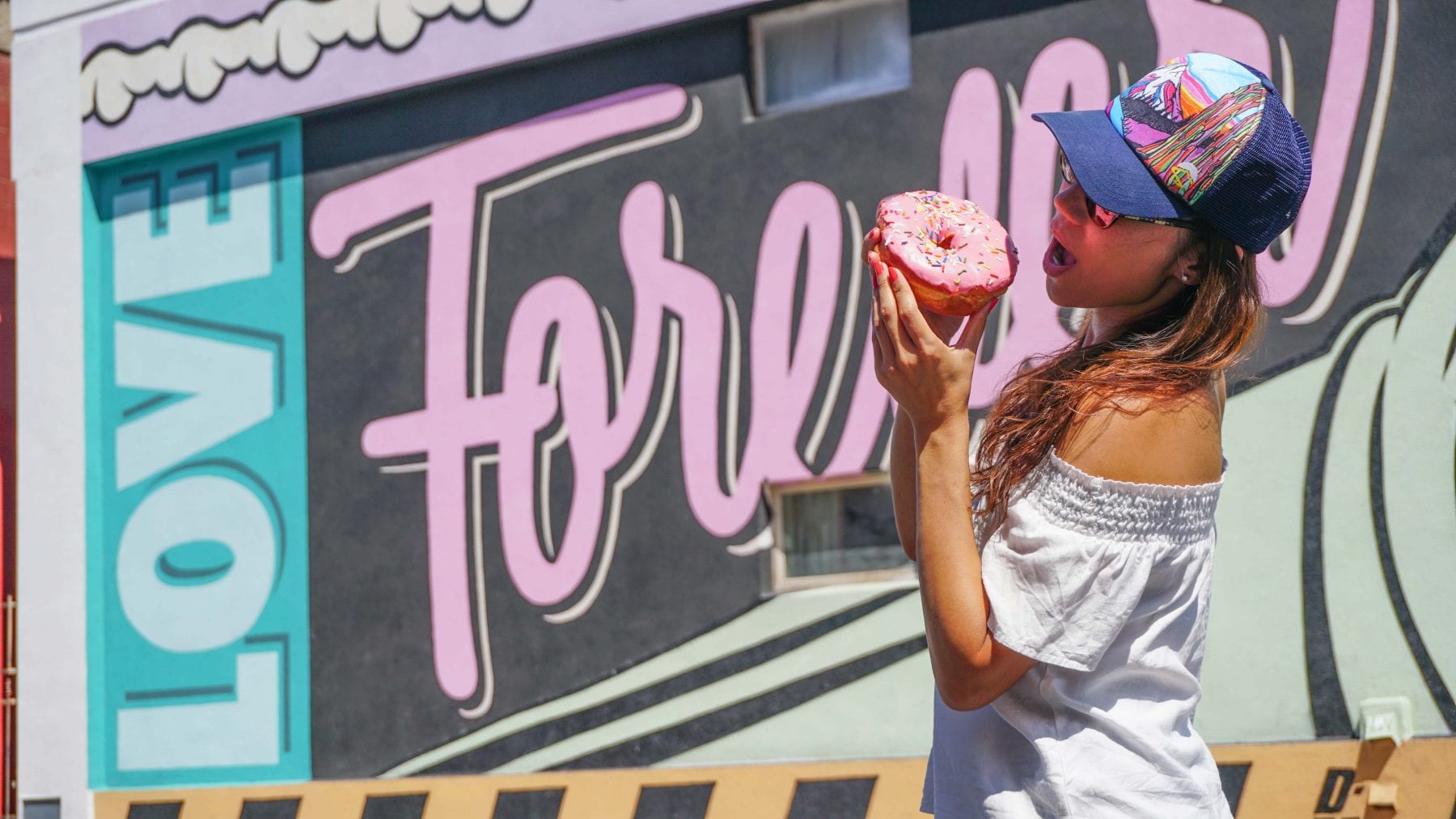 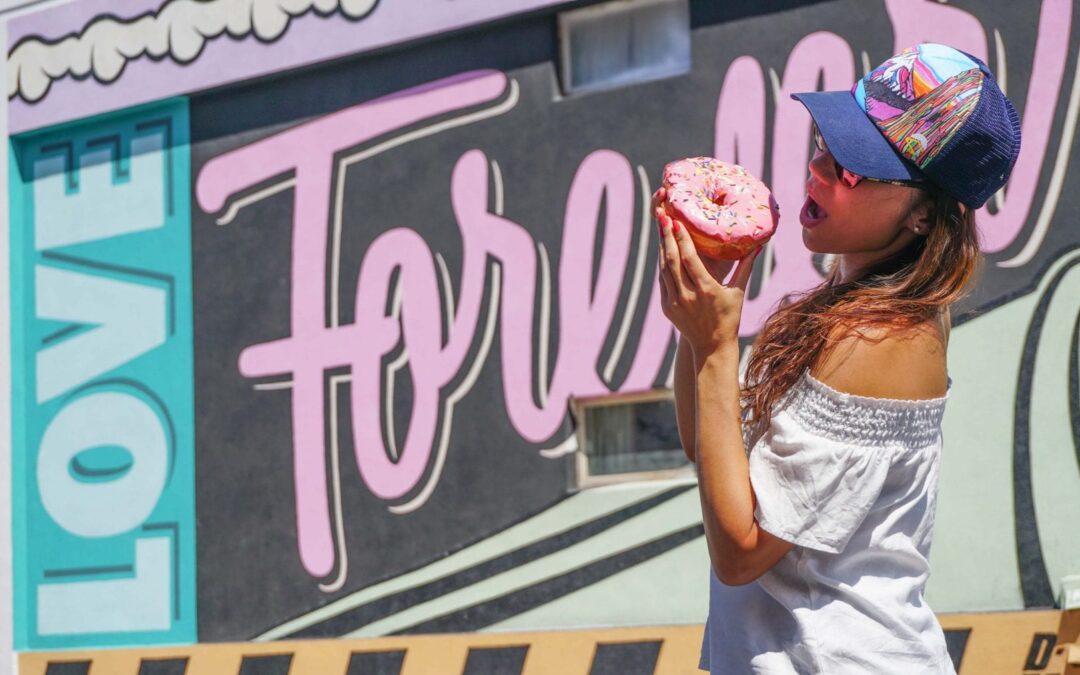 Looking For The Best Donut In Las Vegas?

No matter when you’re waking up in Vegas, Donut Bar Vegas has located steps from the infamous Freemont Street & zip lining tour. You’ll need to add the steps to your Apple Watch or FitBit after indulging in the best cake donuts in Las Vegas. Trust me….one of the most sinful parts of Sin City (aka Las Vegas) is not The Strip at all. Or gambling in the casinos. Or dining in the finest restaurants known to man. If you enjoy these, also check out https://www.shotgun-willies.com/

The oversized Pop-Tart donut comes in weighing a full one pound and has a POP TART in the middle!!! Yep, that’s right 1-LB pound donut with its own Pop-Tart fried inside. This thing is HUGE!!!! It’s like a cake. Bring your friends and share the love, so you’re hips aren’t hating you later. Try the grilled cheese donuts at the Donut Bar Vegas too!

Come with me and my friend and Mandarin translator, Virginia Lui! Let’s go one block from my second PuTTin’ OuT Las Vegas office location at the Ogden, also where Tony Hsieh, Chief Happiness Officer of Zappos lives. Rumor has it that Tony is equally a fan of Donut Bar Las Vegas.

Watch this video to go inside Donut Bar Vegas and see who else loves brothers Jeff and Joe (yes, he’s a Joe serving a cuppa joe) who own Donut Bar Vegas…

And the creme brulee donut is to die for…..just listen to the brulee crack…..

Watch this video to hear the crack of the creme brulee donut….

Just look at the size of the Donut Bar donuts!!! The Pop-tart donut is stuffed with a real Pop-tart!!! The maple bacon donut has an entire strip of maple-glazed bacon on top! I do love me some bacon donuts here and at Salty Donuts in Wynwood Arts District Miami. The creme brulee donut is shown below in the center….it cracks when biting into it. 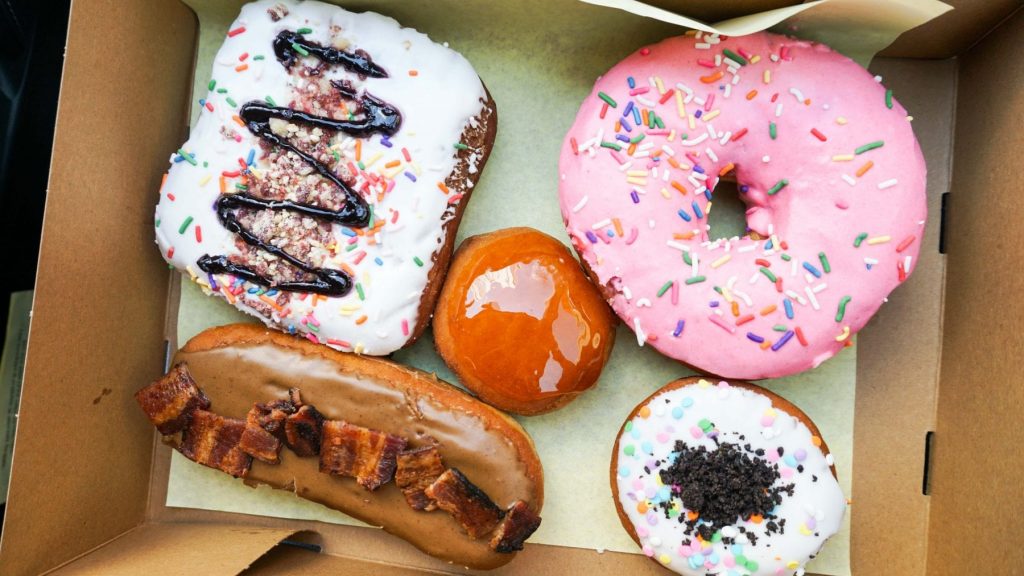 Not only does Downtown Las Vegas have Donut Bar, but there’s tons of great new wall art…including work by Sheppard Fairey. Exceptionally, “Be a Maker, Not a Taker!” 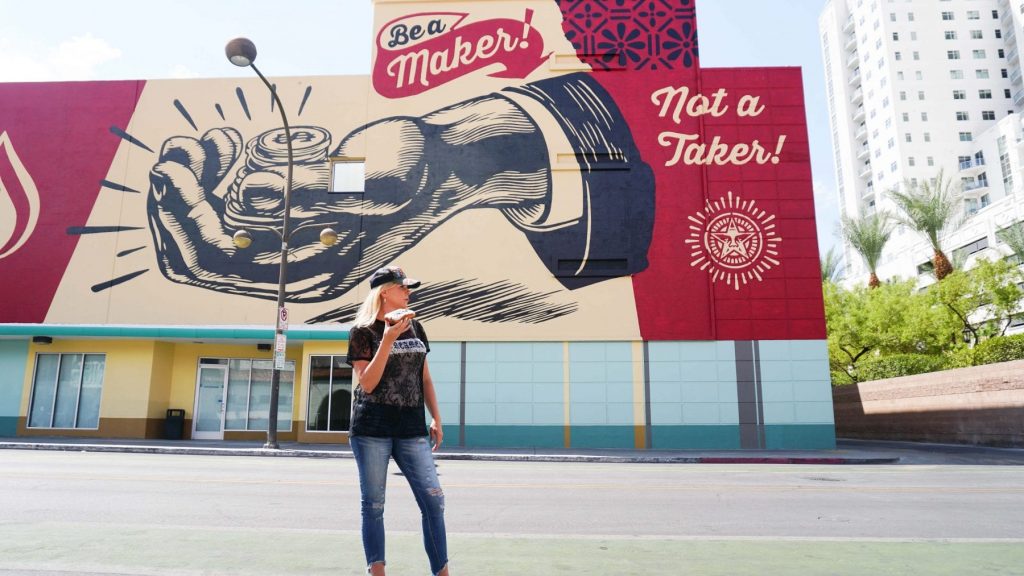 I mean, seriously, my best Asian friend in the whole wide world can barely fit her hands around this donut!!! 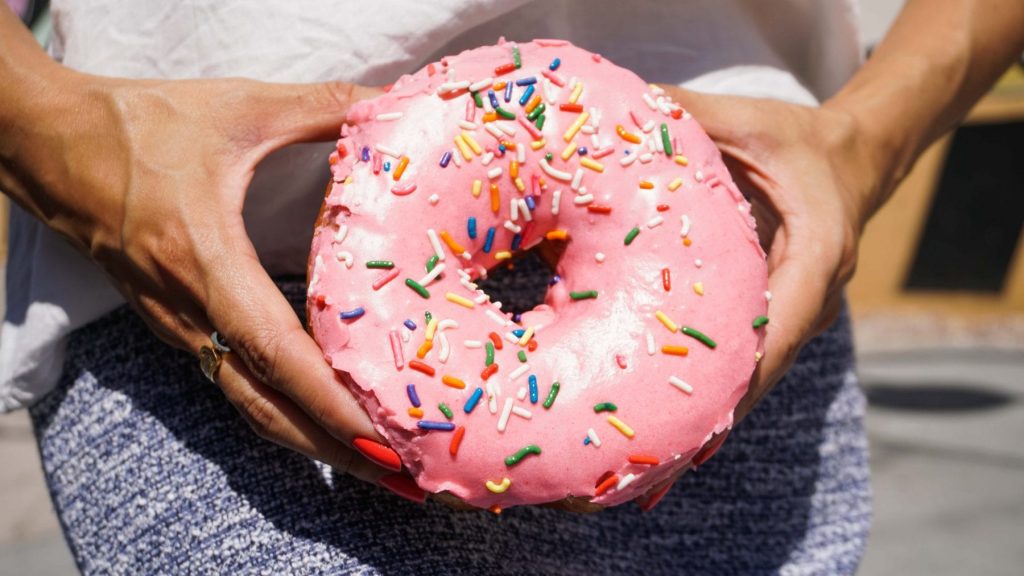 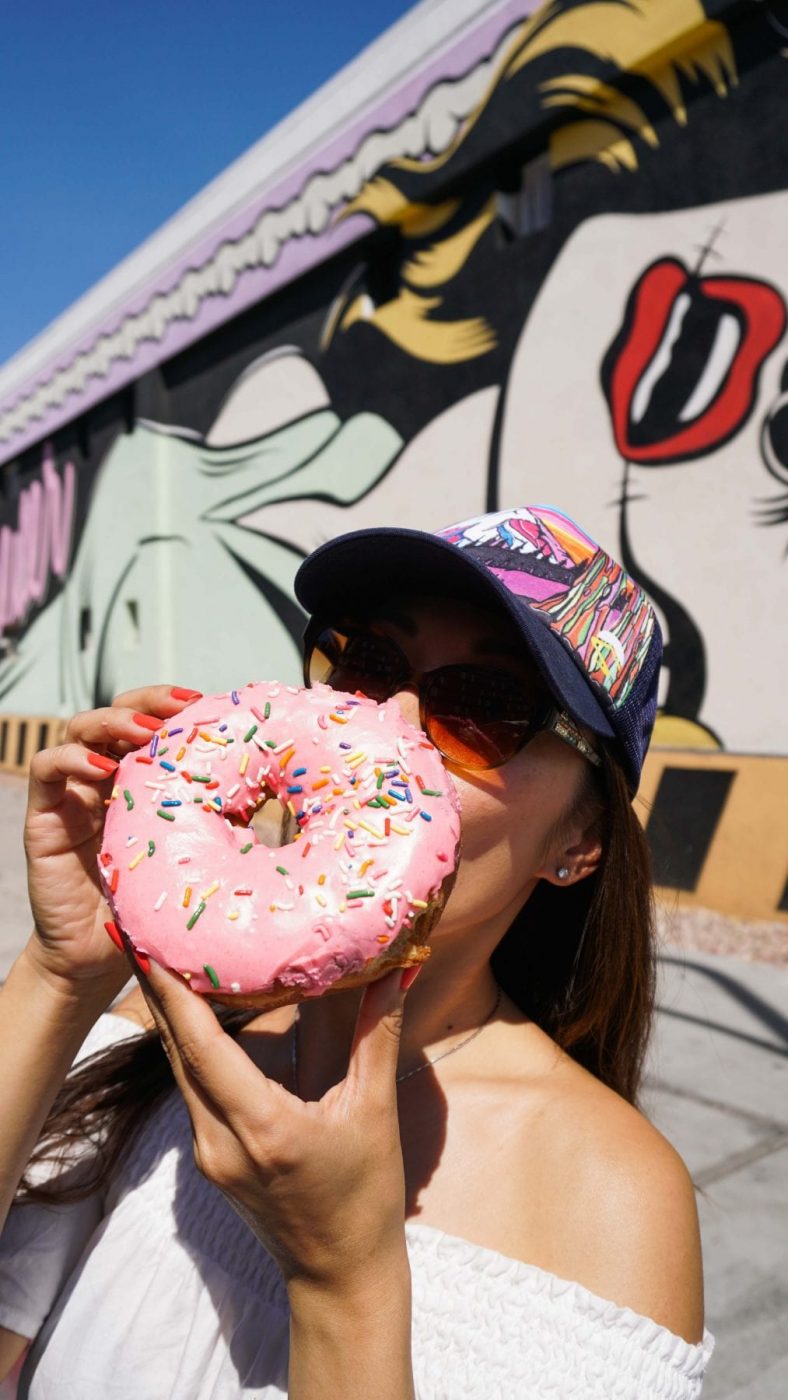 Not only are they big and beautiful, but Donut Bar donuts are also full of flavor. There’s just one caveat…because it’s Vegas, YOU MUST EAT THE DONUTS WHILE THEY ARE FRESH! Remember…there’s no humidity in the air in Las Wages. 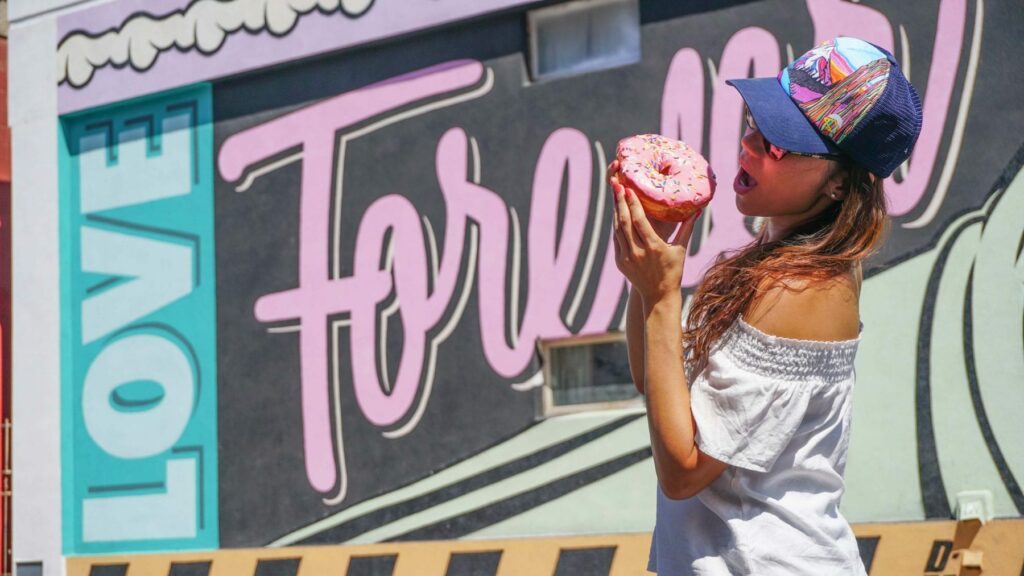 I don’t even like Pop-Tarts, but I love this donut! 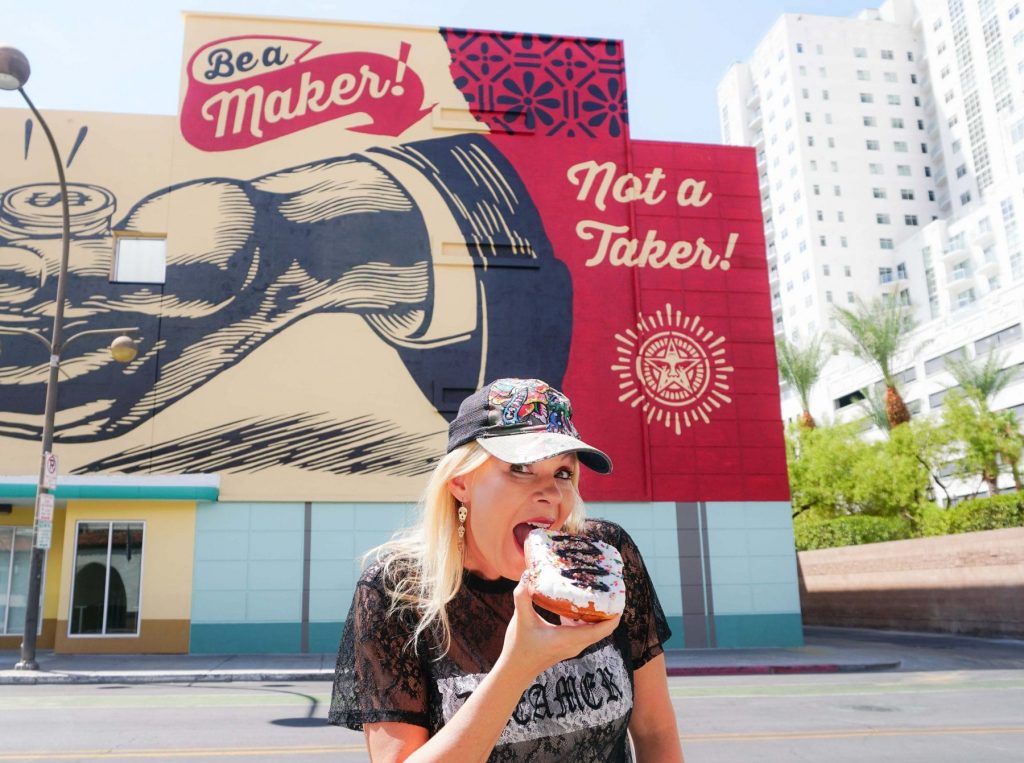 Virginia, thanks for being a fantastic photographer + model with ALL of the other things that you’re good at!

Jeff & Joe, you both ROCK! Your P.S. This Rocks ROCKSTAR stickers will be in the mail this week!

P.S. After you finish stuffing your faces and your bellies on this travel journey, head on over to the Historic Neon Sign Bone Yard to see all of the old Vegas neon signs.

P.S.S. Just in case you missed my 7 Fun & Free Things To Do on The Vegas Strip – click here to save big in Las Vegas.

Christi Tasker For more than 10 years, Christi Tasker was a nationally acclaimed award-winning retailer and interior designer. While she treasured and nurtured her gift boutique and interior design company, she ultimately discovered her true passion – MARKETING and BRANDING! With an eye for detail that only comes from a skilled and experienced designer, Christi learned the secrets to creating a clear, concise brand – one both unmistakable and unforgettable − that would stand out from the crowd. The interest in marketing and branding for businesses actually had its beginning in her family. As did many devoted moms, Christi shadowed her then eleven-year-old daughter, Macy, whenever she ventured online. On one particular day, Christi had an epiphany as she watched Macy scour MySpace for any news in the virtual world of “Webkinz.” Christi placed an order for those lovable furry friends, with their special codes for use with online games, and when they arrived, she shared the news on MySpace, not knowing at the time that she had crafted her first social media campaign. When the college gates went down on Facebook, Christi immediately became one of the first non-college friends of Facebook. And more than just a casual user, she quickly discovered a side of Facebook that only programmers knew about – The Facebook Developer − full of options and tools to help companies better use the web. Christi quickly recognized that marketers either needed to be formally educated about social media or needed a partner to manage their sites. She launched a social media marketing company, which today provides social media branding, strategy, monitoring and training worldwide. Before long, she realized her ability to keep up with her many social media accounts was hampered by the lack of a suitable tool to keep everything in one place. Christi decided the best way to do a job properly was to “do it yourself” and developed PuTTin’ OuT (Socially Accepted) a set of tools to moderate, manage, create, schedule, and publish content, and automatically engage people, all in a single package. In early 2009, Christi began traveling nationally as a social media expert speaker for various brands and businesses, and today is a sought-after social media keynote speaker at the foremost conferences worldwide. she also appears on NBC as a social media advisor/expert.
27
Shares