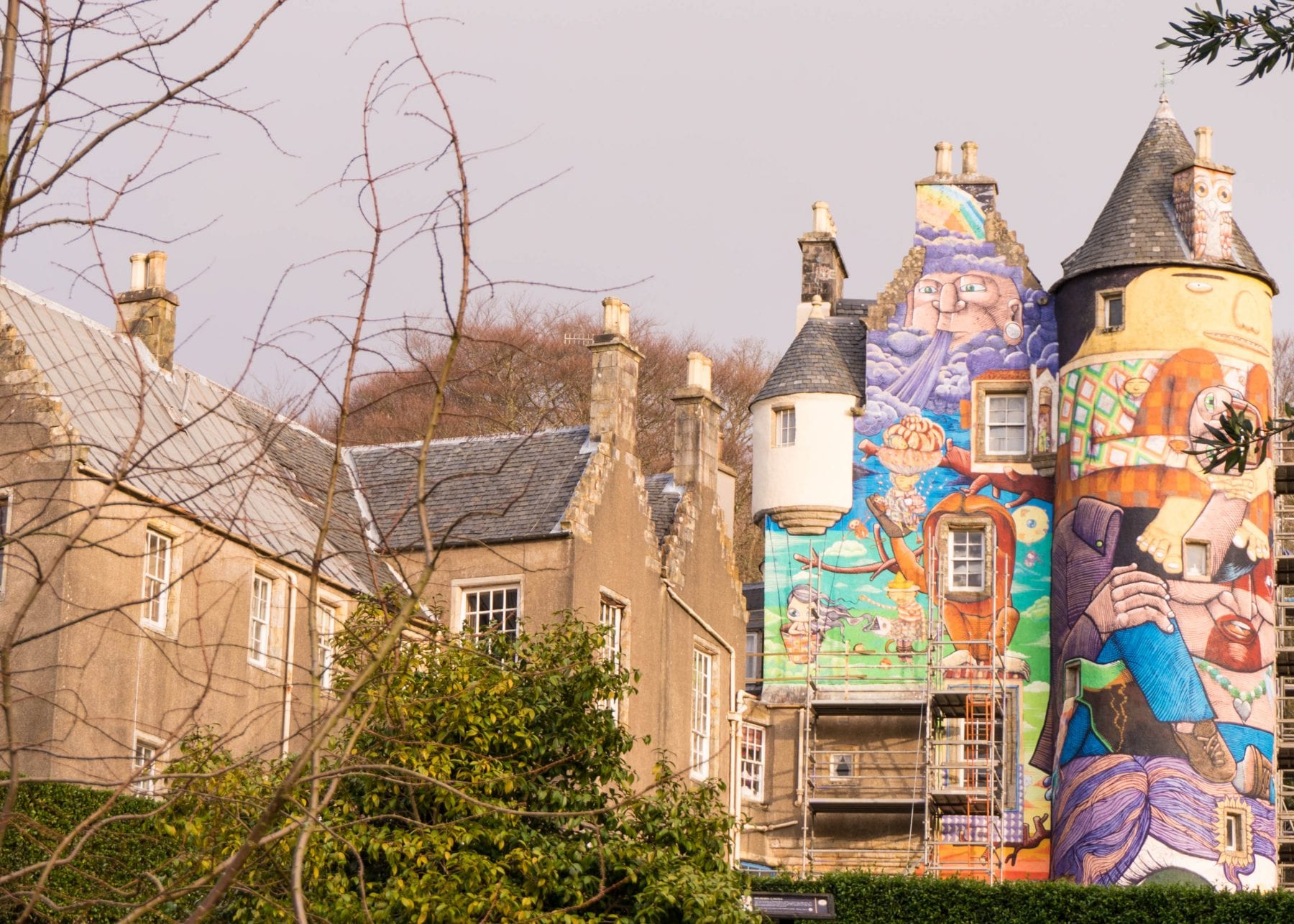 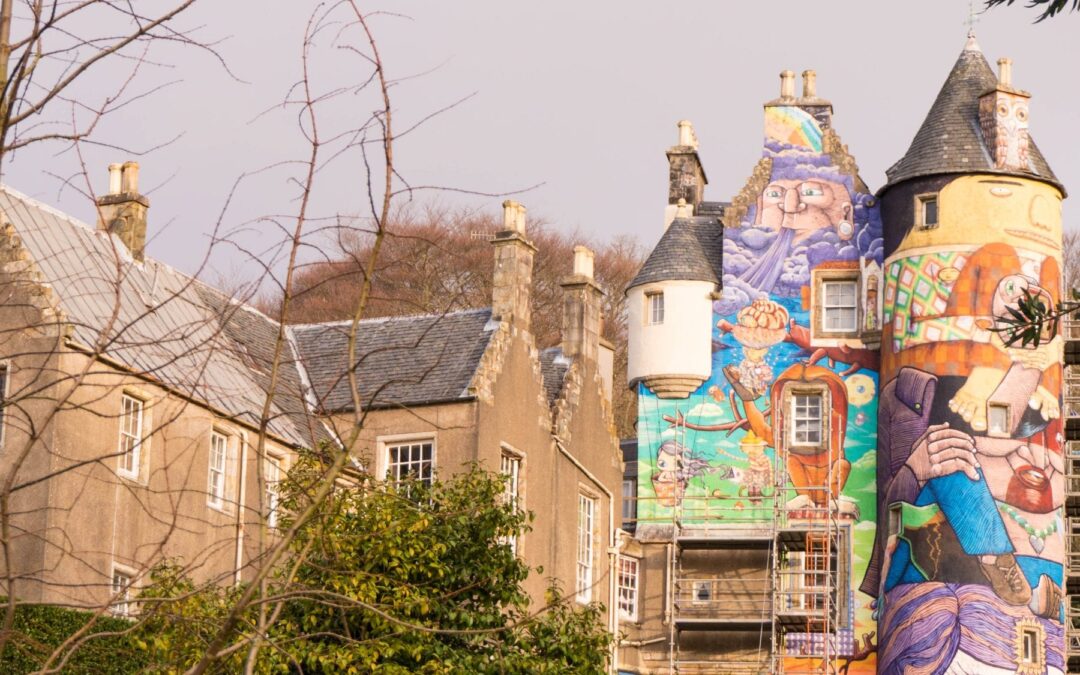 Sitting high in the rolling hills of Haylie Brae, between the villages of Largs and Fairlie, North Ayrshire, Scotland, overlooking the Firth of Clyde and Largs Yacht Haven, is Kelburn Castle. The first thought that popped into my head on my initial visit was, “If Wynwood Art District in Miami had a castle, this would be it!

What’s so different about Kelburn Castle?

In one word – Graffiti! On the OUTSIDE of the castle! Say it isn’t so! There is no other castle in Scotland that looks like Kelburn Castle. And, therein lies the controversy….. 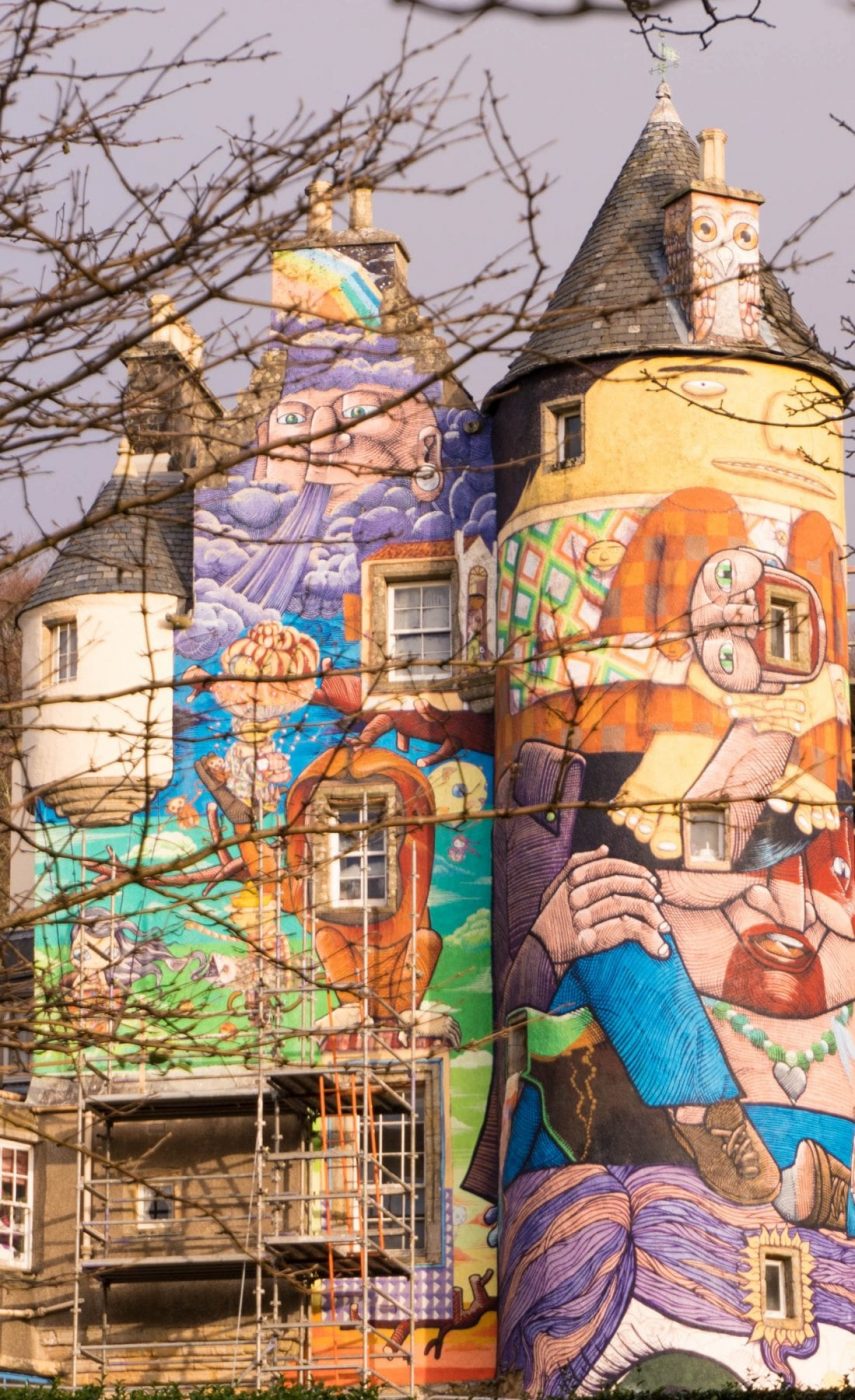 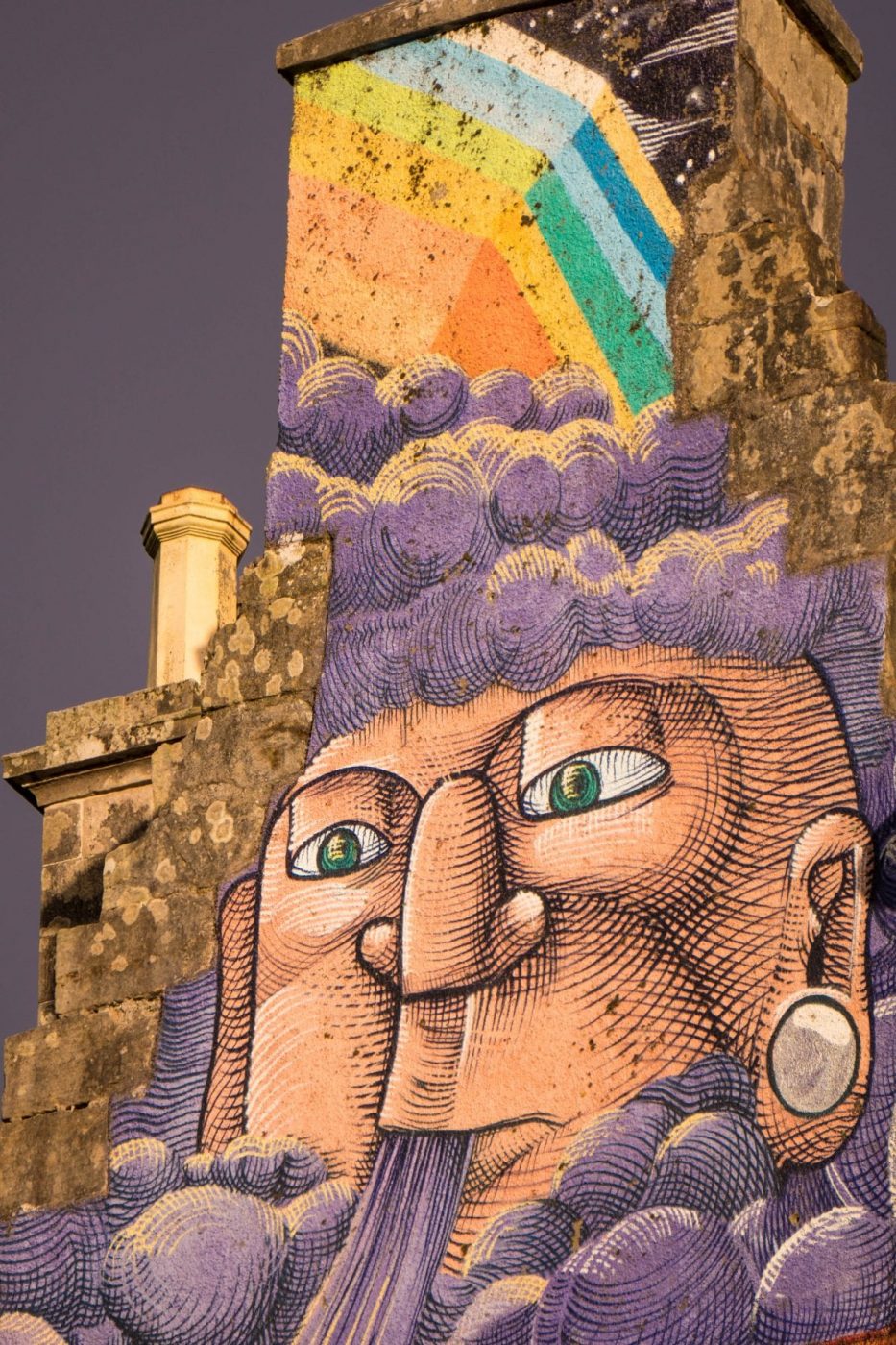 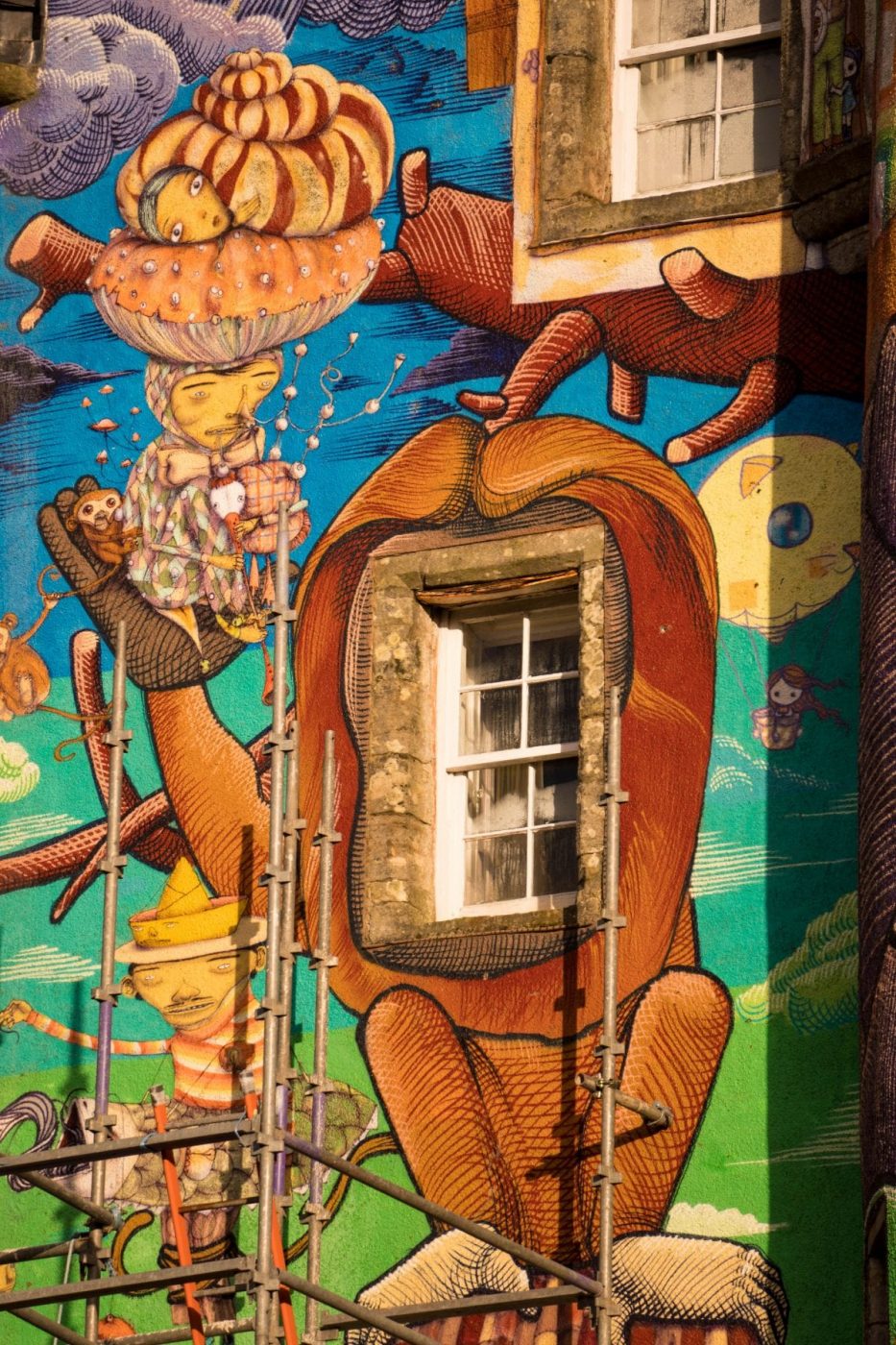 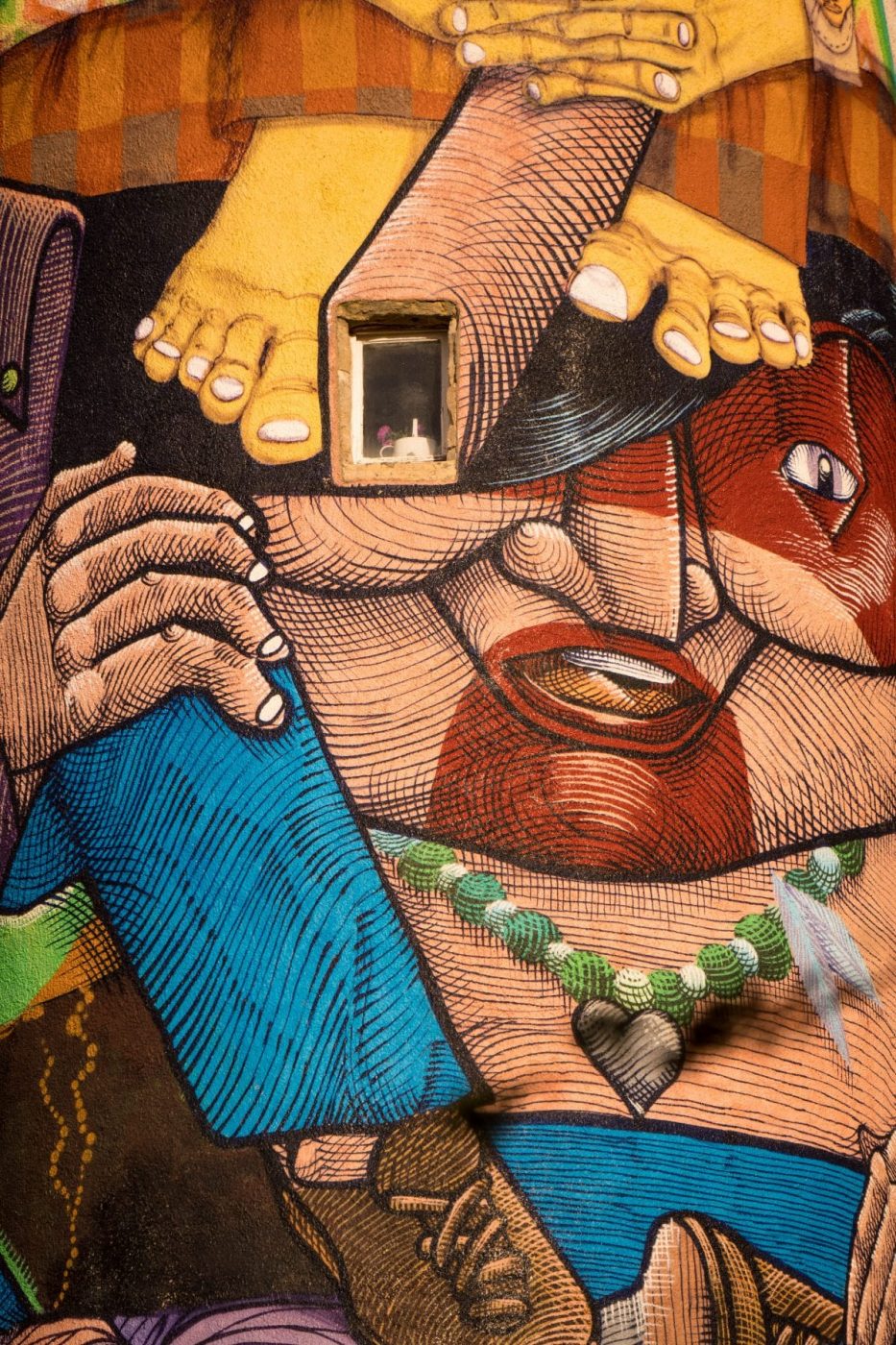 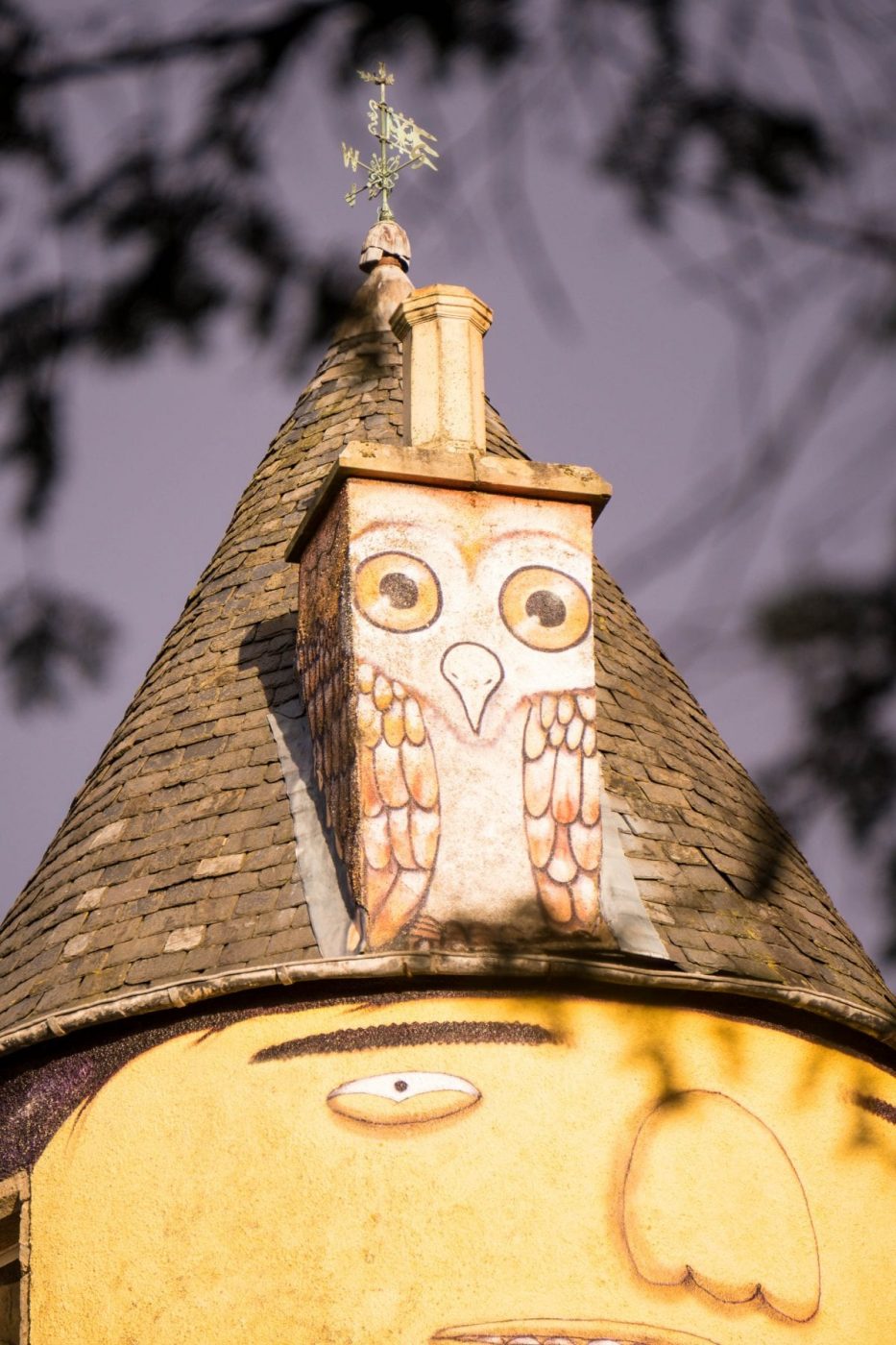 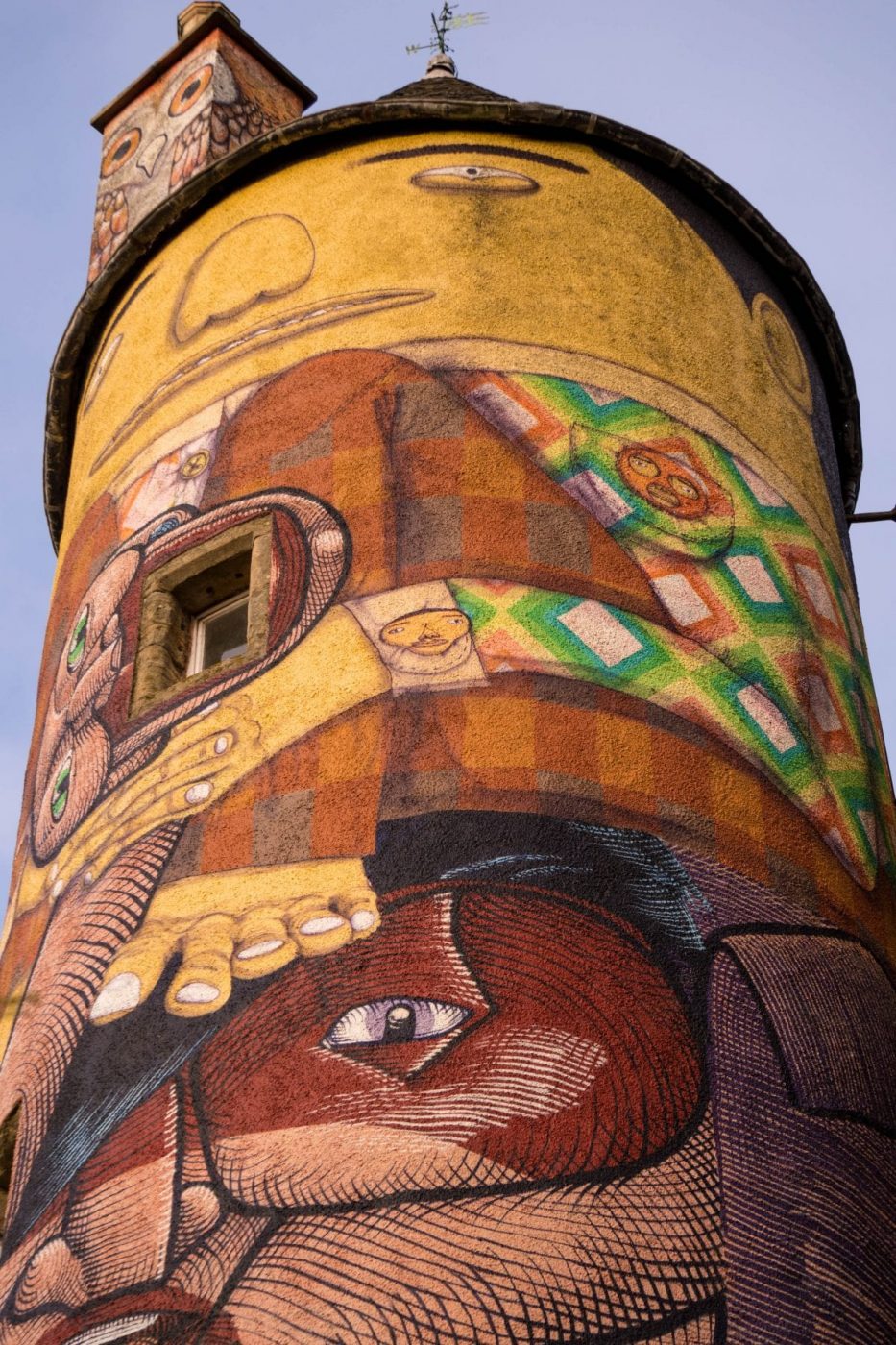 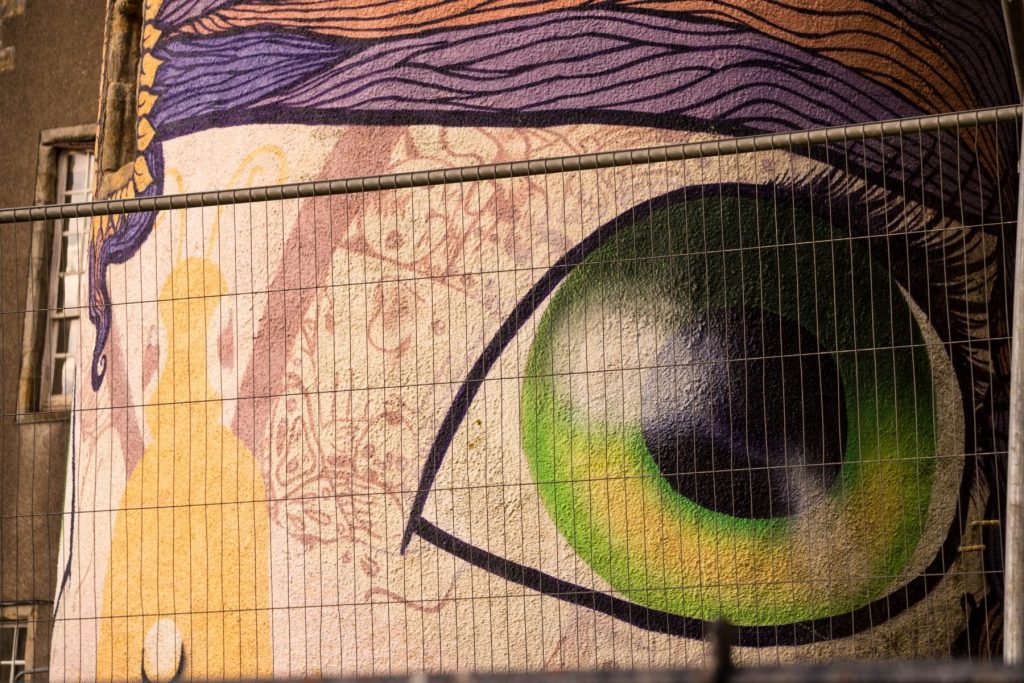 The History of Kelburn Castle in Scotland

This iconic Kelburn Castle was originally built in the thirteenth century and is the seat of the Earl of Glasgow. After being remodeled in 1700, the first Earl made extensions to the house that was reminiscent of a French chateau. This castle remains like that today.  Another interesting note is that Kelburn Castle has the distinction of being one of the oldest castles in Scotland and has been occupied by the same family longer than any other castle in Scotland. 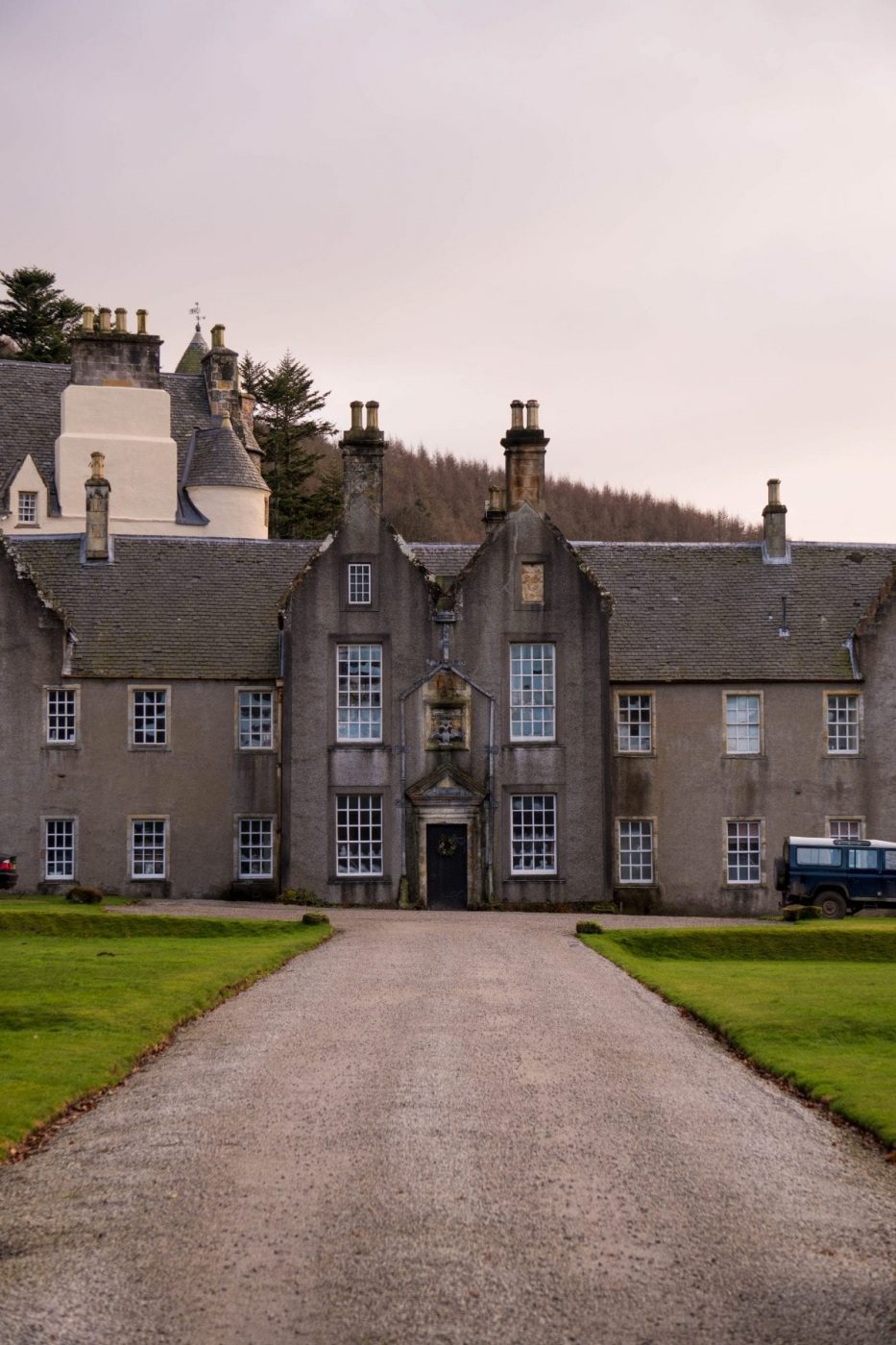 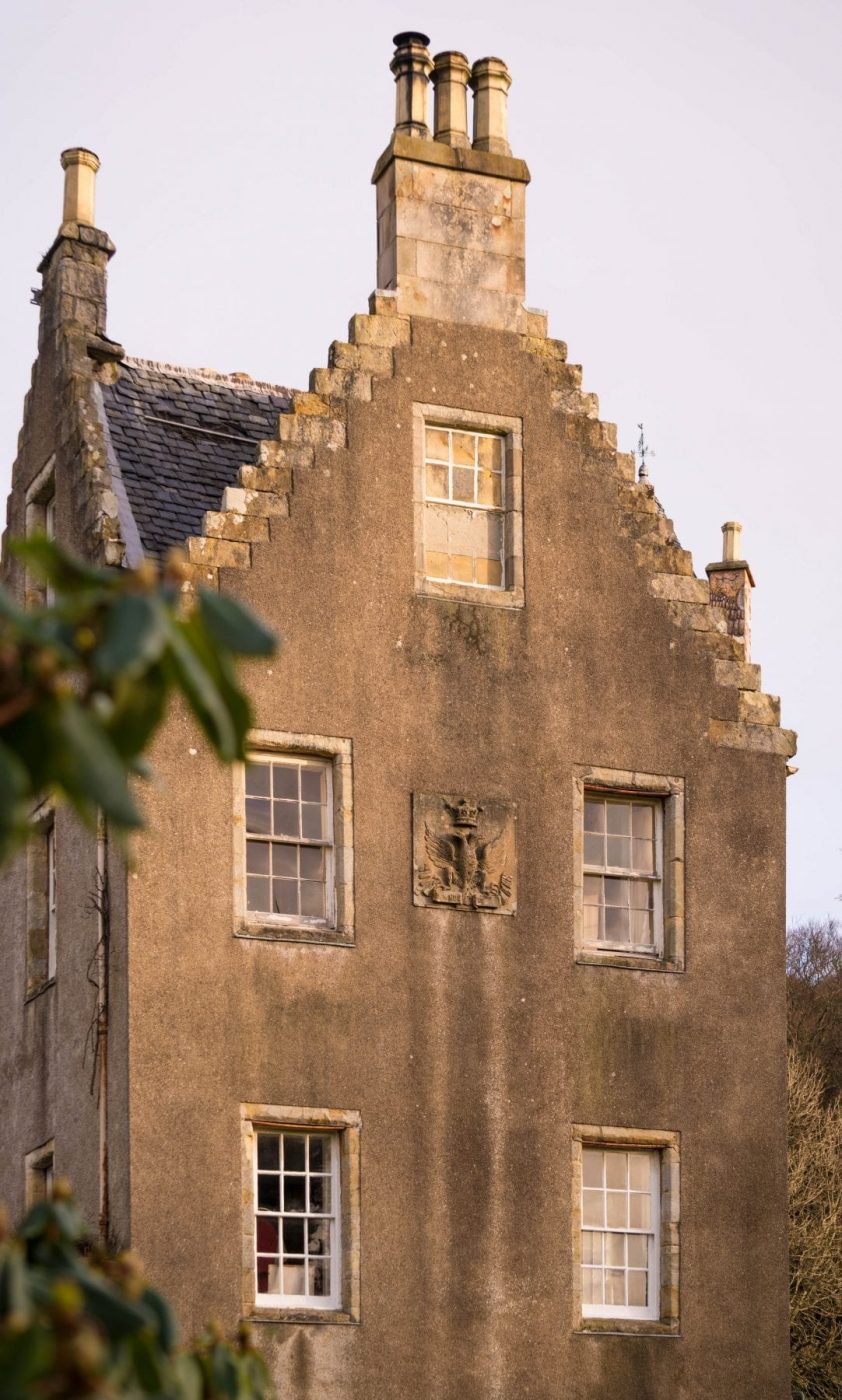 As any homeowner knows, homeownership is not for the faint of heart. And, neither is owning a castle! According to a recent documentary, Lord Glasgow told BBC4 that he “lurches from one crisis to another to keep the place going”.

So, in 2007, when the owners were informed that the concrete facing would need replacing to prevent further damage to the stonework, his children suggested that four Brazilian artists be invited to tag the castle before the true historical re-facing would take place.

The idea was that the graffiti would be removed once the “proper” restoration was done. Fast forward a to 2017 – and a LOT of attention (both good and not-so-good!). The graffiti remains and, by all accounts, has the blessing of Historic Scotland.

The grounds of Kelburn Castle + the graffiti project

The house and grounds opened to the public in 1977 and remains a favorite place to visit for those in the area. My daughter, Christi, and I visited Kelburn was a typical Scottish day – wet and rainy. That didn’t keep us from exploring the grounds with some of the most unusual (and BEAUTIFUL!) foliage that I’ve ever seen. 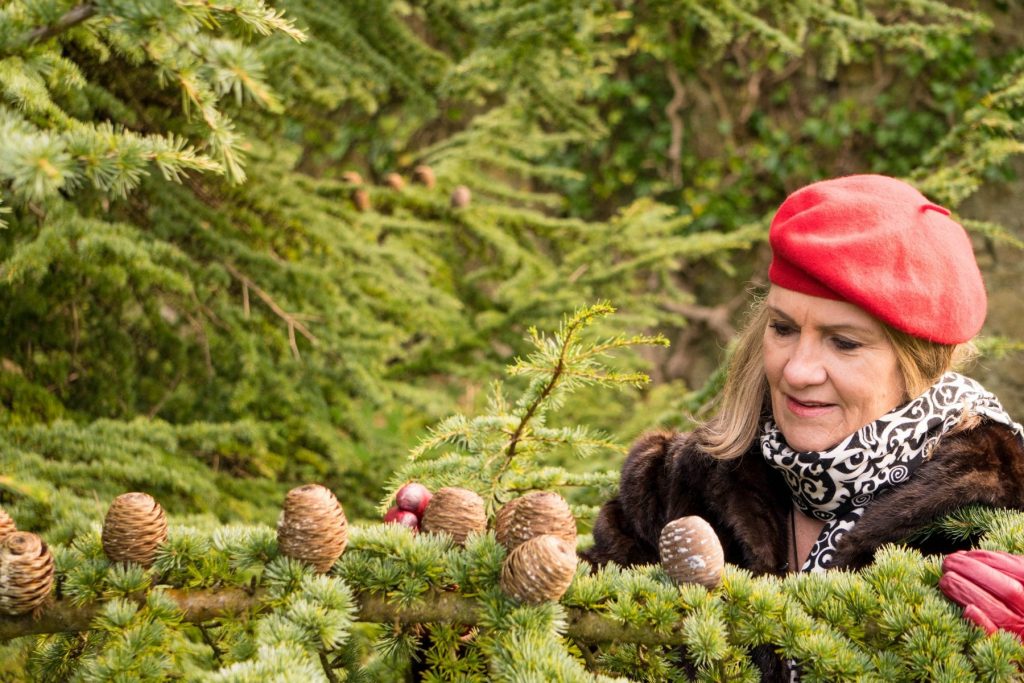 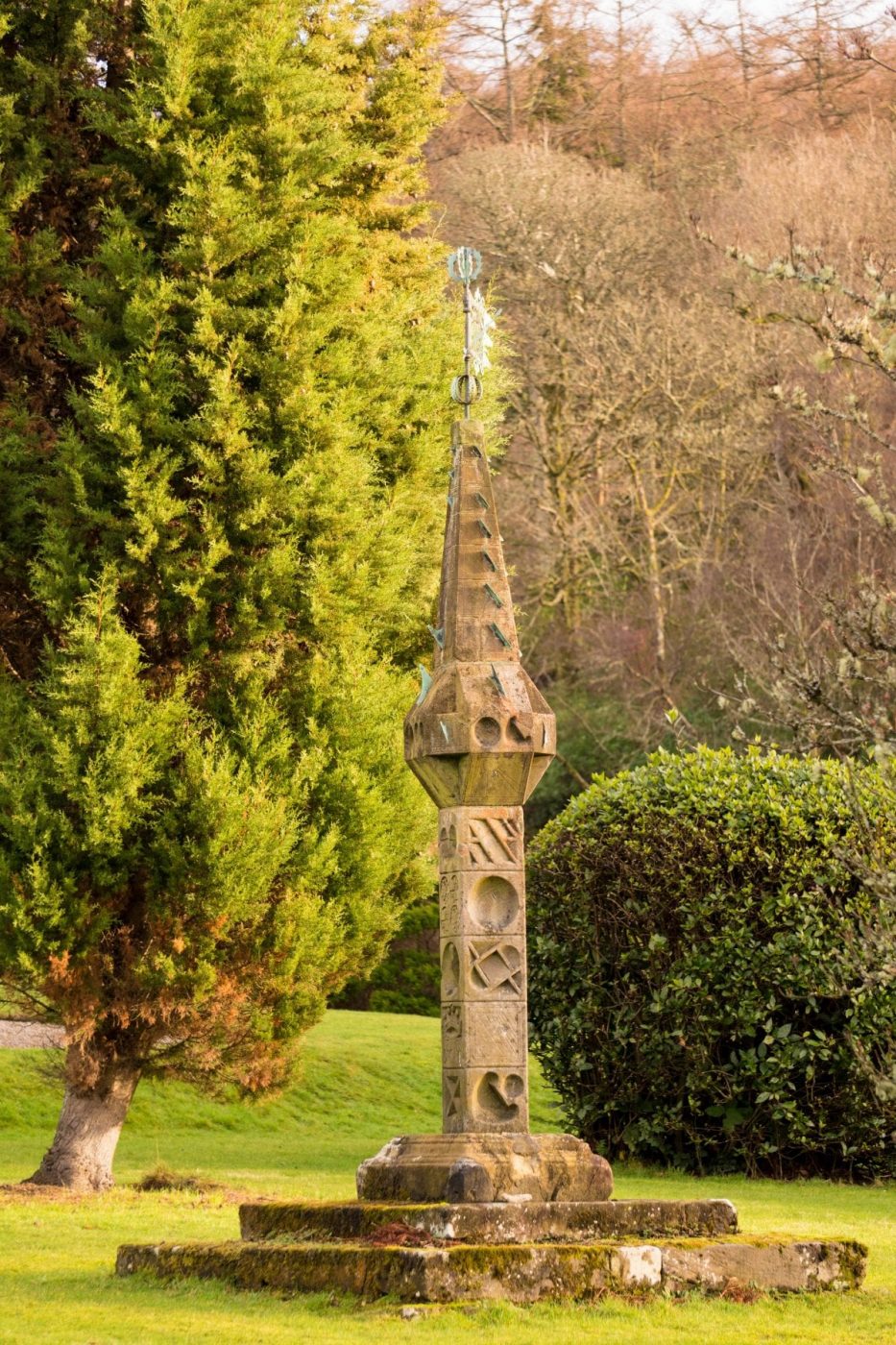 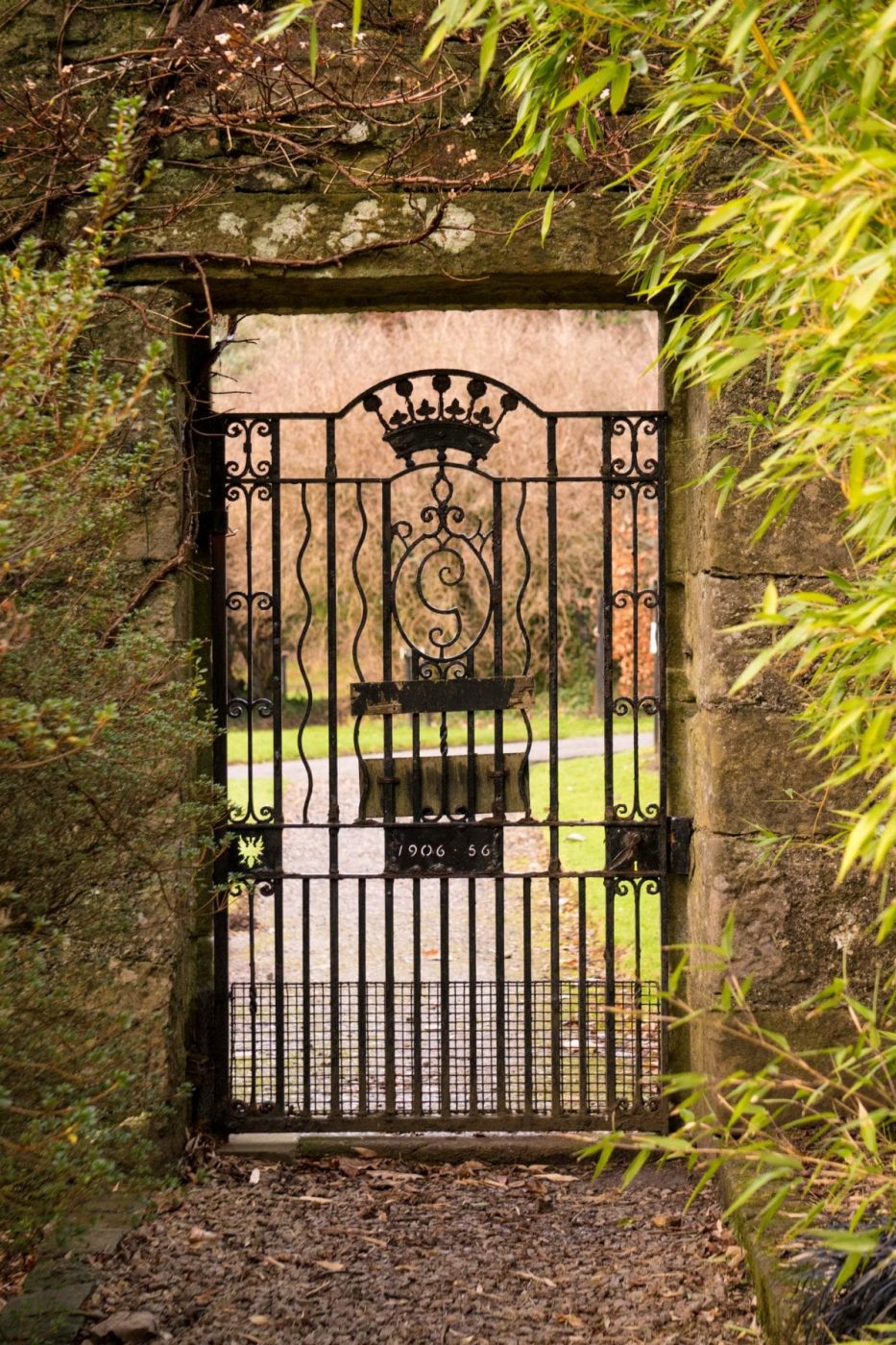 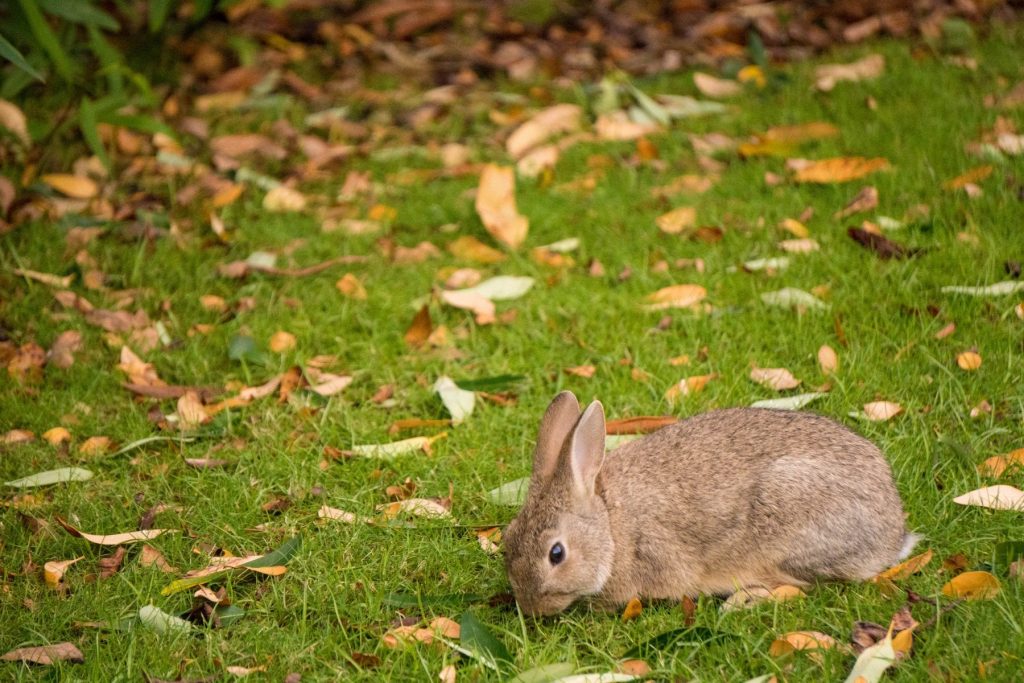 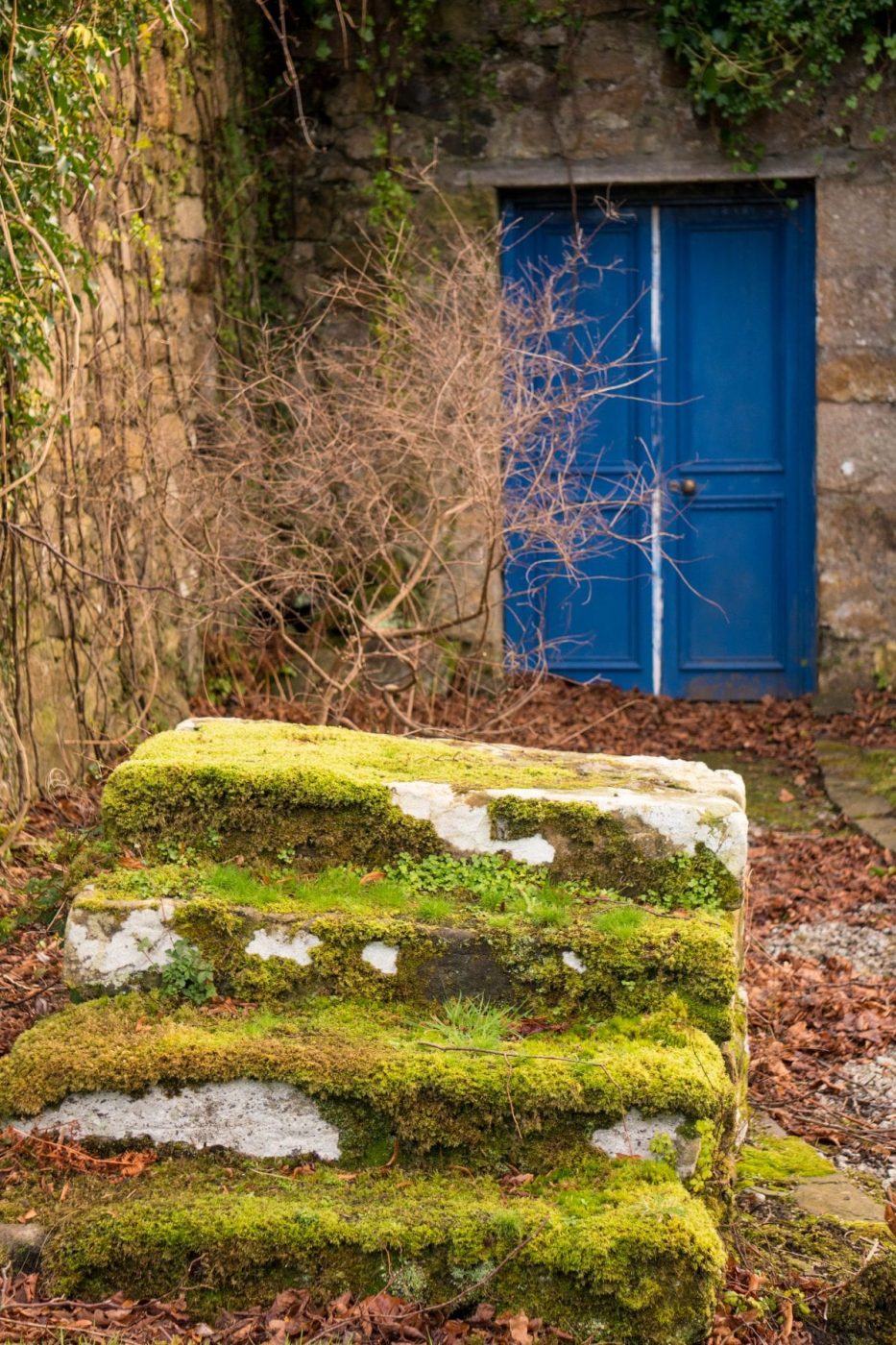 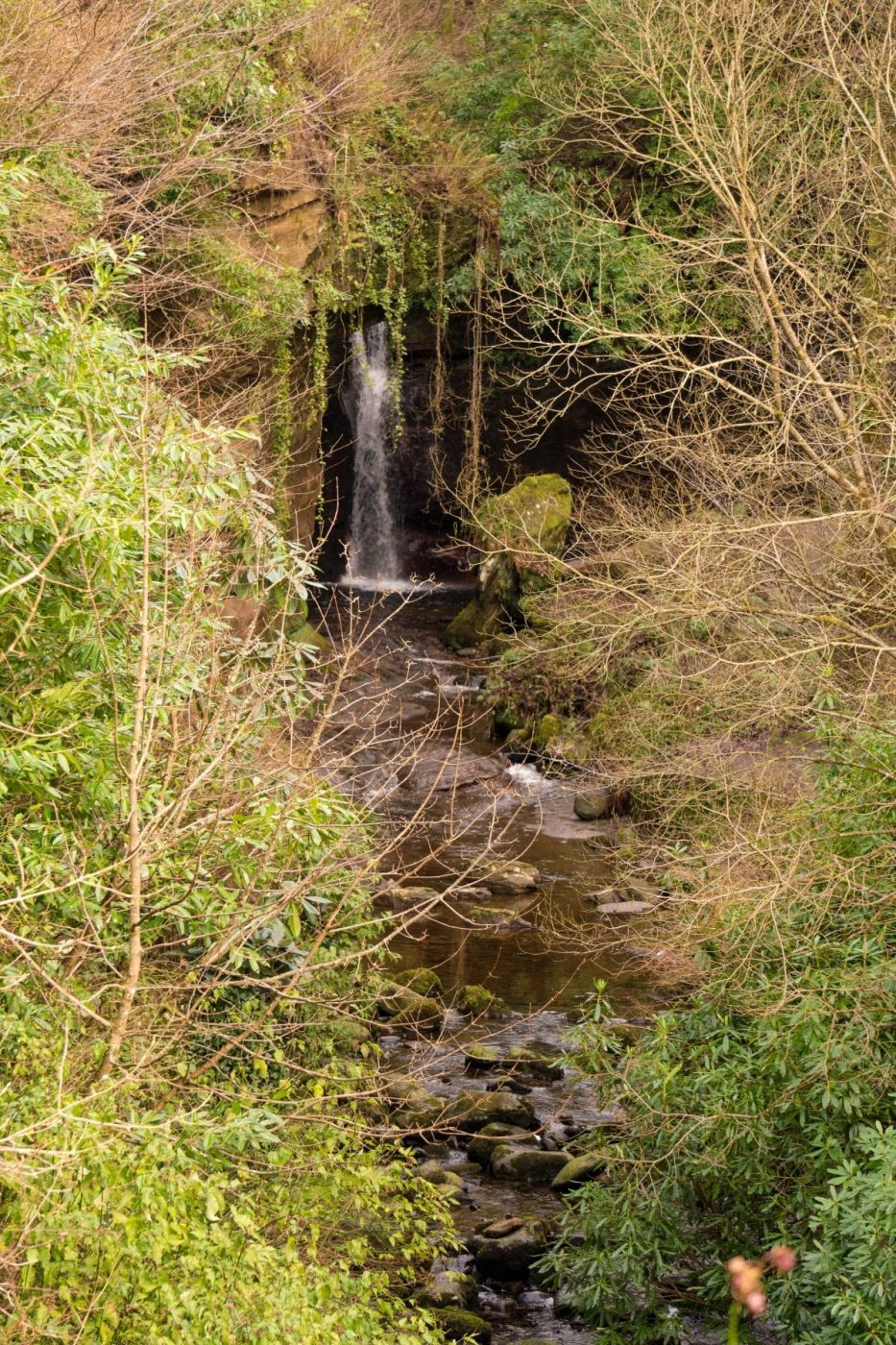 From the stream and bunnies running alongside the castle to the Secret Forest, we explored for several hours. We imagined what it must be like to live in this magical castle overlooking the herb and “Children’s box garden”, which is in the shape of the Scottish flag with their individual initials planted in shrubs, to the horse stables and equestrian riding rings to the lush green golf course maintained by Largs Golf Club. 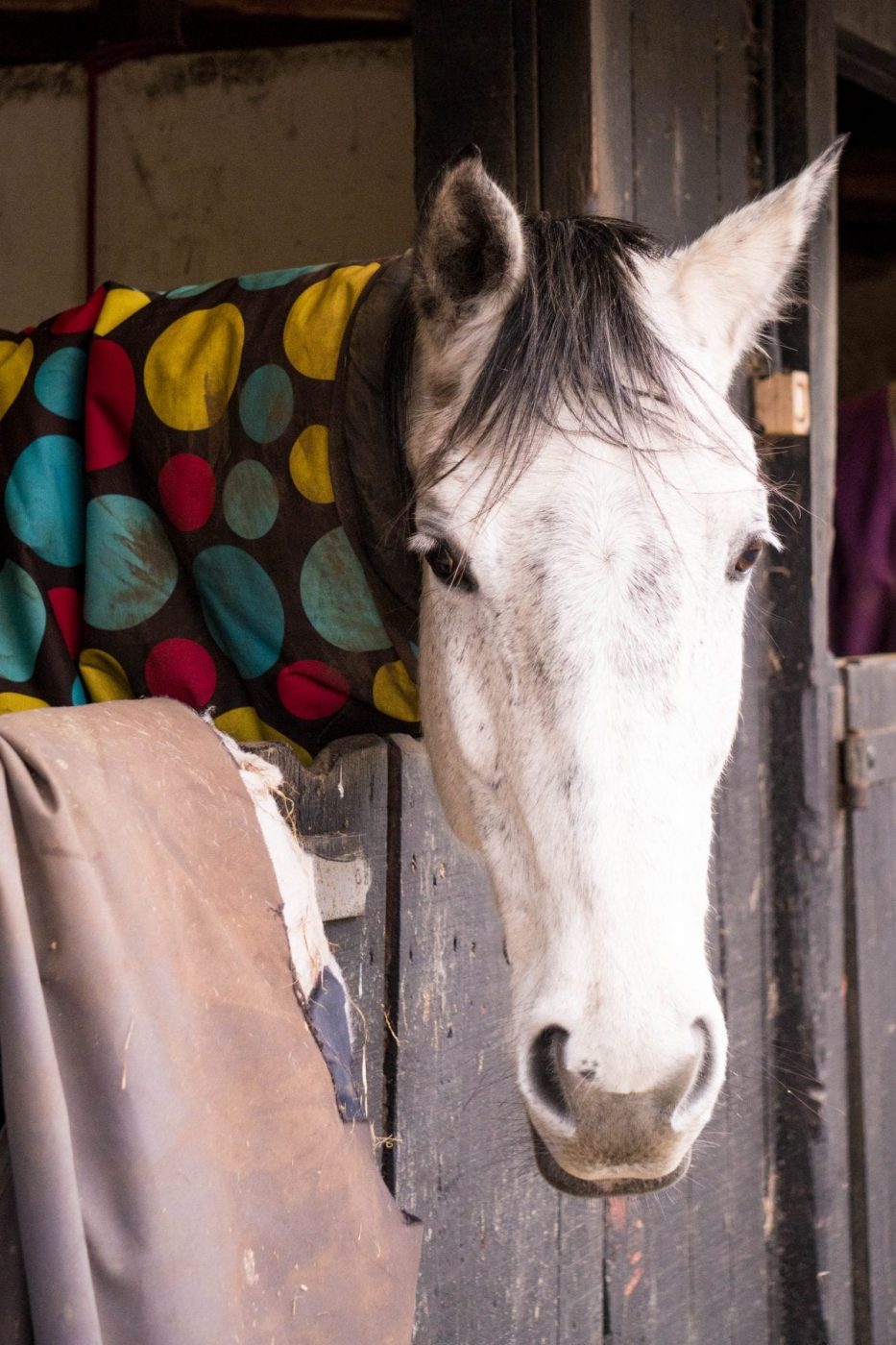 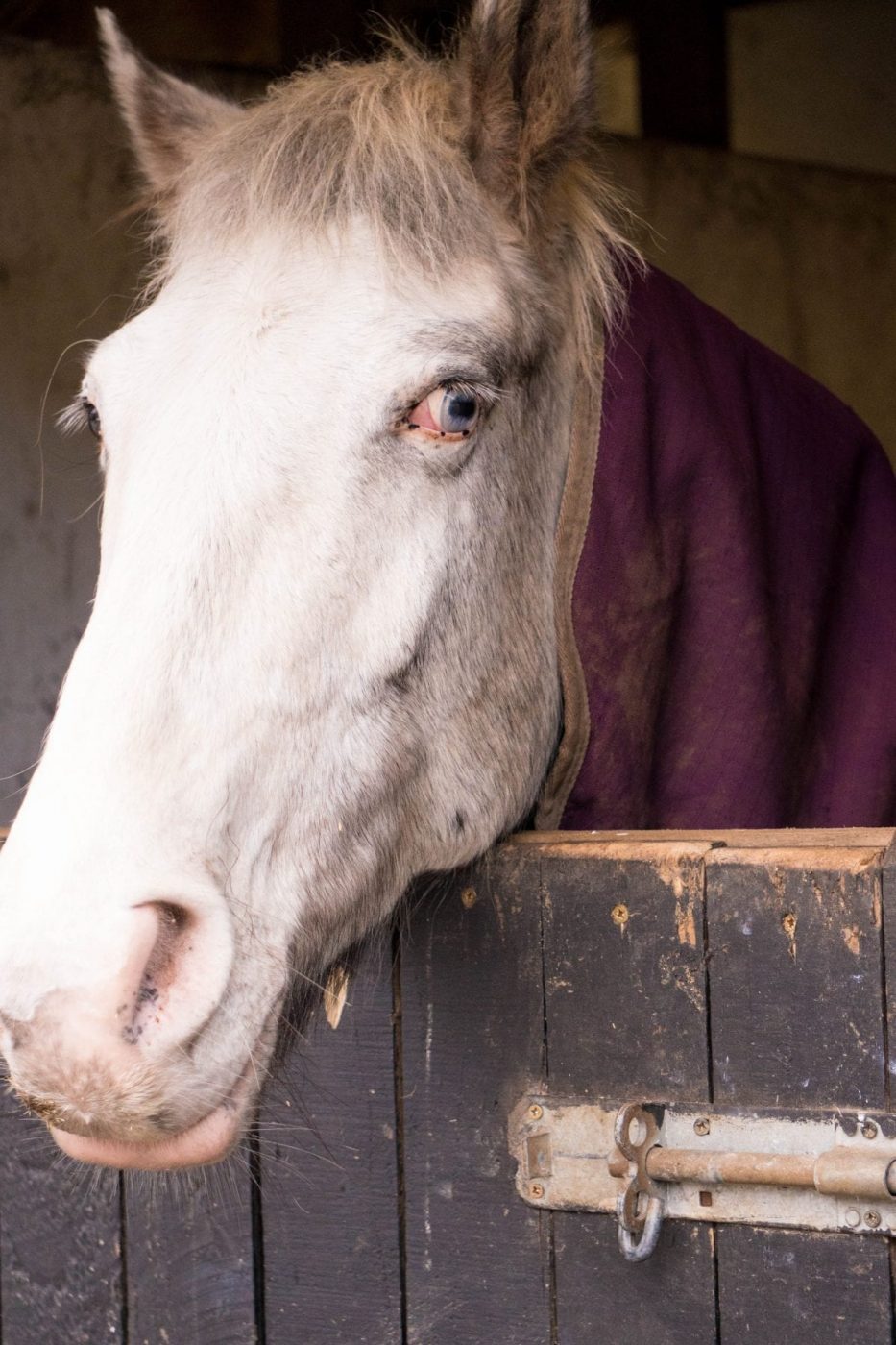 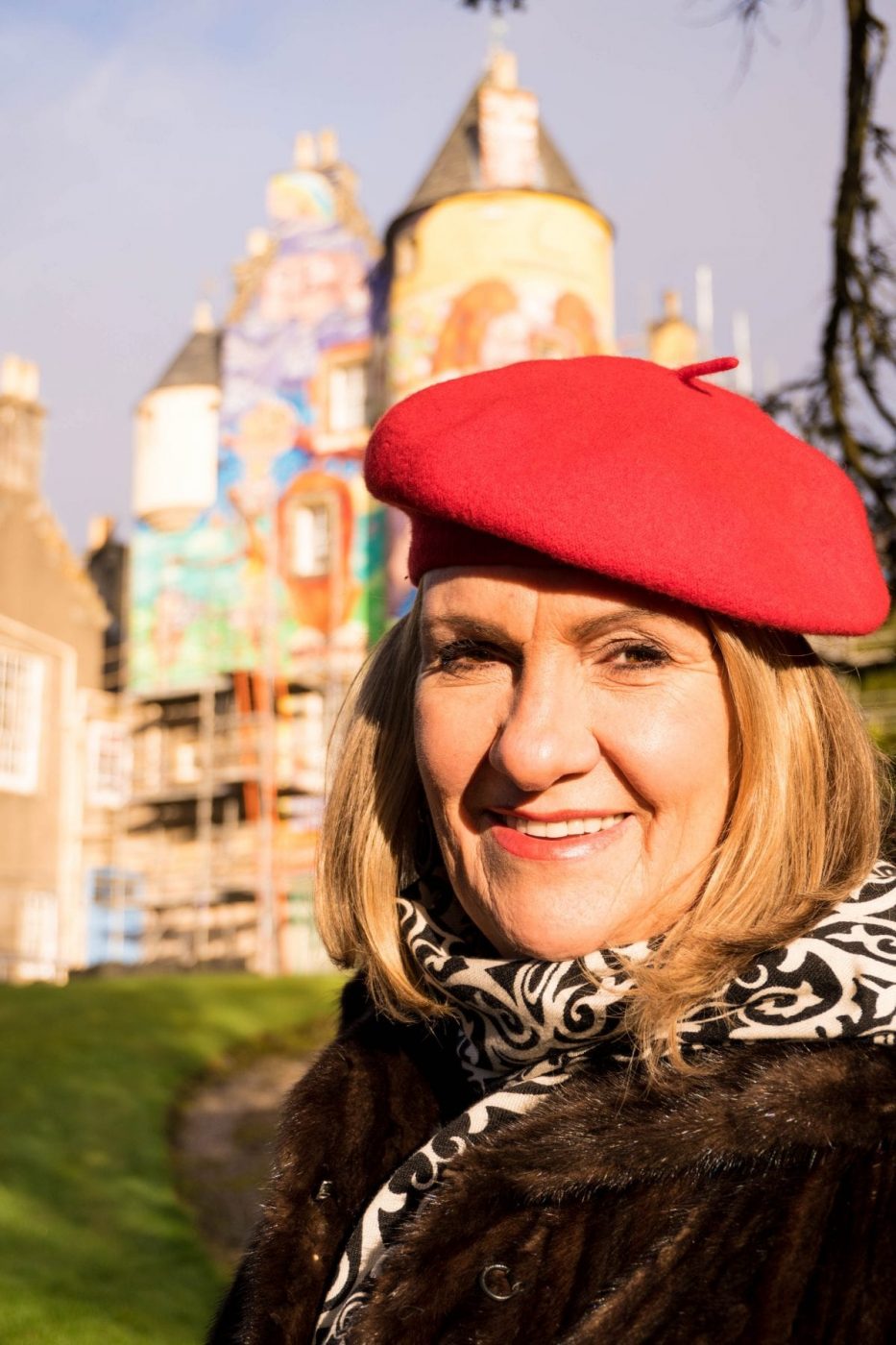 At the end of the day, we both decided that neither of us wanted to be the Queen of Kelburn Castle, but it is a “must see” when in North Ayrshire, Scotland.

Watch this timelapse video to see how the Kelburn Castle Graffiti Project unfolded….

Click here to see Christi’s cool coat that matched the Castle and discover one of her favorite souvenirs.